Life can feel a little relentless sometimes. Waking up day in, day out to repeat the same chores on a never ending cycle can really wear me down. Yet, in the world of Animal Crossing, the pleasant monotony of doing daily tasks is calming.

Animal Crossing, to me, is way beyond being just a game. I began playing Animal Crossing when I was six years old, starting with Wild World on the Nintendo DS. I was instantly hooked, and found the game mildly challenging – it was far more difficult for my six year old self to unlock upgrades or have the hand-eye coordination to catch a fish, but I persevered regardless. Looking back on my entry to the franchise, it’s easy to wonder how I was so enthralled by the game, given its limited features in comparison to some later editions of the game, but I actually played it on and off up until I turned nineteen. It was then, just after I’d dropped out of my first year of university, that I finally bought myself an upgrade of a 3DS from a Cash Converters, accompanied by a brand new copy of Animal Crossing: New Leaf – and oh my, was I blown away. The new additions of character functionality, Kapp’n’s island, and expansions on how much control you held over the game’s customisation really impressed me.

To say that this was only three years ago is pretty astonishing, especially when you consider the 2020 release of Animal Crossing: New Horizons. Timed almost perfectly with the enforcing of lockdown rules for the first time, myself and millions of others found ourselves with ample free time to craft the perfect island. Since then, people have gone on to create some incredible and impressive islands, celebrities have visited fans’ virtual homes to sell and purchase Turnips as part of the Turnip Exchange programme the game offers, and friendships have been made as a result.

So, considering my extensive experience with the Animal Crossing franchise, it’s only fair that I say thank you. Thank you to Wild World, for keeping my younger self amused in the back of the car on long journeys, and for providing years upon years of escapism when things in the real world became too overwhelming or difficult. Thank you for teaching me patience, either in the perils of catching the rarest fish, or waiting on certain days or events bound by the real-time internal time systems. Thank you for helping me to realise that it’s okay to take things one step at a time, and that if I break down my day into smaller tasks, everything seems a bit more manageable. It’s odd that a game with little-to-no narrative can teach you so much about yourself, but Animal Crossing aided me with that from a young age.

I genuinely hold so much random knowledge now at the hands of Animal Crossing, particularly surrounding bugs or fish. The information passed onto players from NPCs such as the museum’s resident owl Blathers is fascinating, and inspired my younger self to search for wildlife in my own back garden. I even made my parents take me pond dipping once – probably an activity they weren’t massively enthusiastic about, but I imagine they were happy to see me taking a keen interest in nature. I can still recall random facts about random species at the drop of a hat, and it’s (somehow) proven useful on several occasions.

For a simple and wholesome game, I cannot ignore the benefits that Animal Crossing has had on my mental health. It’s calmed me down from panic attacks, helped me through depressive episodes, and validated my emotions in a way I didn’t know games even could. It just feels important to acknowledge that.

Beyond the random facts and escapism, Animal Crossing actually provided some really heartwarming sentiments that have stayed with me to this day. Particularly the pearls of wisdom from the occasionally-visiting sea otter, Pascal – they genuinely mean a lot to me, even now. Here’s a personal favourite of mine: "Wherever you are, whether you're in a house or in your own head, make it comfy. You be good to you, maaan”. It’s so incredibly poignant, and for someone who has spent a portion of their life as a prisoner to their own mind and thoughts, I recognise the sheer gravity of that statement. It’s so massively important to look after yourself and your environment. Animal Crossing has an impressively covert but effective way of teaching that.

So, to Animal Crossing, the characters and the lessons learned, I have to say thank you. Thank you for being such an important part of my life for so long, for teaching me things about myself and the world, for reminding me that consequences have actions, for getting me through incredibly tough times in my life, and never shying away from emotional expression. Long may this educational impact continue. 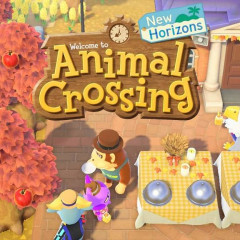