Nintendo hasn’t always been centred around a bouncing plumber or raccoon tycoons, although most people would be forgiven for assuming the world renowned Japanese game company began as exactly that – children’s video games! However, the history of Nintendo reveals a company that has always tried to keep up with trends in gaming, until it became one of the most recognisable brands worldwide.

When it was created, Nintendo was known as Yamauchi Nintendo, named after company founder Fusajiro Yamauchi. He began manufacturing Japanese playing cards in Kyoto in 1889, later adopting a Western style that became popular in Japan. It wasn’t until 1951 that the company had the name we recognise today – Nintendo Playing Card Co. Ltd. Ties with Disney and their characters saw Nintendo playing cards enter the children’s market in 1959.

As the 60s dawned so did Nintendo’s progression into video games alongside playing cards. Their production expanded throughout the decade, experimenting with electronics and creating video games in the 1970s. However, it wasn’t until 1980 that we gained the first glimpse into Nintendo today. With Nintendo now operating in America, the game Donkey Kong was released. In it a plumber called ‘Jumpman’ tries to rescue his girlfriend Pauline from the titular crazed monkey.

Jumpman was given another identity, however, that is now synonymous with Nintendo’s brand. Was it a little green clad lad called Link from the Zelda games? I think not. Round old Kirby? No, don’t be silly! It was Super Mario of course! And here’s a fun fact: Jumpman was renamed because the character bore such a strong resemblance to the office landlord, Mario Segali, in Nintendo America’s HQ.

Nintendo began to develop more games, including the Legend of Zelda, but it was Super Mario that really exploded into becoming a household name. Technology developed at the same time, with the Game Boy becoming the first portable handheld games console in 1989. Following this, Nintendo’s consoles included the Super Nintendo Entertainment System and the Nintendo 64. The latter’s classic game library includes Goldeneye, Super Mario 64, and Mickey Mouse Speedway USA (which is basically a Mickey Mouse Mario Kart with circuits in different areas of the UK – a personal favourite from my childhood).

The millennium saw Nintendo globalise, establishing offices all over Europe in places such as the UK and Italy. Pokémon, first released in 1999, exploded worldwide and has since become part of the world of iconic Nintendo characters. The Nintendo DS was released, a hallmark of most of Gen Z’s childhood, and the handheld console also introduced a shrewd little businessman in the form of Tom Nook. Animal Crossing: Wild World taught children how to squander fruit and save for a house, whilst also convincing me fossils could be retrieved from my back yard.

Nintendo continued its stratospheric rise with one of the most iconic consoles. The Nintendo Wii probably saw the destruction of many a family heirloom in the family home but revolutionised gaming with its easy(ish) motion controls and family friendly gaming. The company continues to develop its consoles rapidly, although not always successfully – the 3DS and Wii U were particularly low-points for the company.

However, the demand for the Nintendo Switch exceeded even Nintendo’s expectations! When released in 2016 it consistently was the best selling console of the time, and has become one of the most popular consoles ever released by a company. The hybrid console was made all the more compelling because of its adaptations of classics, such as Mario Kart. From its humble beginnings as playing cards, the brand has developed into one of the most loved brands worldwide, attracting children and adults alike.

Which consoles do you remember the fondest? Or which games? Hopefully this brief trip into the history of Nintendo has made you want to go and play one of those old games again! 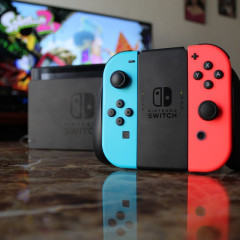 Before Mario: The history of Nintendo