Creative coach Camilla Fellas Arnold discusses her role, and how aiding creatives’ mental health is paramount to their work.

The arts can be a lonely place. Working on a project, whether it be a book or a piece of artwork, is usually a self-reliant process, working with your own thoughts for a long period of time. If this loneliness starts to negatively impact how you’re feeling, it is legitimised as part of the ‘artists’ struggle’ – considered necessary in order to produce something great. This norm of the ‘tortured artist’ may make people less likely to reach out for help. Speaking with Camilla Fellas Arnold made me realise that this should not be the norm for creatives.

Camilla is a creative coach. Before I spoke to her I had no idea what this job entailed, but soon discovered that it is an incredibly useful collaboration in helping creatives succeed. She challenges the narrative of having to suffer to be creative, and looks at producing something artistic from a place of happiness rather than struggle.

With beginnings in graphic design, Camilla seems to have made a huge leap in her career path. Her love of books throughout her life led her to designing book covers and working in the publishing industry. It was only when people approached her to ask for help in the writing that she considered coaching. Believing she had a lack of experience in order to help people she undertook training in coaching and soon realised she had a talent for it.

Camilla describes one of the writers she worked with, who needed help with his descriptive passages. After listening to him for one session she surmised that his writing wasn’t the problem, rather his confidence. They took a few sessions looking at this and according to Camilla:

“In our last session he said he’d signed up to the NHS wellbeing service and he was on the waiting list, and he’d said through working with me his confidence had grown so much he had actually asked to come off the waiting list.”

Creativity and therapy are traditionally separate entities. However, through Camilla helping to solve this writers’ block, she also seemed to have aided his mental health. Through her coaching Camilla has learnt that stress means you go into survival mode. For example, when lockdown first began and people were finding it difficult to be creative it is because they were focused purely on making it through the pandemic. Creativity suddenly became inessential for survival, which is how writers block or other creative blocks occured. Stress that triggers this survival instinct can happen in many different circumstances and times within your life, for example trauma. Having someone such as Camilla allows people to overcome or understand why they are struggling creatively, whilst also helping with other issues in their life that feed into these problems.

Camilla helps creatives with writer's block for example, by looking at it in two ways. One issue could be within the ideas themselves, which is an easier fix, however another can be a lack of belief in your own creativity. It sounds obvious to any creative or to anybody in any profession, that if you tune out what others are saying and focus on yourself it will better what you are doing. Sometimes this can be easier said than done on your own, and the fact coaches such as Camilla offer support to do this feels much more productive than trying to battle internal problems yourself – not to mention being better for your mental health.

Camilla also considers inequality within creativity, and how her role can personally impact creatives with less privileges than others. This includes working with companies to give her a wider reach to the people that work within these companies, and change how they interact with creatives. The aim behind this is to make sure they value creativity. She also runs online classes making content accessible to those who may not be able to afford masters tuition fees, or further education within the arts.

After talking with Camilla it made me realise that there is a massive problem with the way we look at the arts. Not only can the arts be an inaccessible place for many, but also creatives are seen as a service to society, that their art exists for public consumption rather for the artists themselves. Mental health knocks are now normalised as the price for creating art.

It is why discovering Camilla’s profession feels like a welcome relief for creatives. The idea of having someone to guide you through your struggles, and ultimately your work being a product of your happiness rather than your poor mental health seems so obvious you don’t understand why it is not common practice. The fact these attitudes are not common, however, shows we need to massively reshape how we value ourselves as creatives or others – which is incredibly difficult in a country that does not give the arts the time and respect it deserves.

If Camilla’s coaching methods feel as if they would work for you, or you are interested in what she does, you can visit her website https://camillafellasarnold.com to find out more.

Alternatively, you can find her across social media:

For the full interview head over to Voice’s YouTube at  https://youtu.be/FE2vXKTwyco and check it out now! 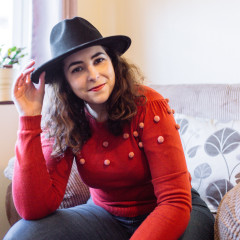 Camilla Fellas Arnold on being creative, and the myth of the ‘tortured artist’

Creative coach Camilla Fellas Arnold discusses her role, and how aiding creatives’ mental health is paramount to their work.