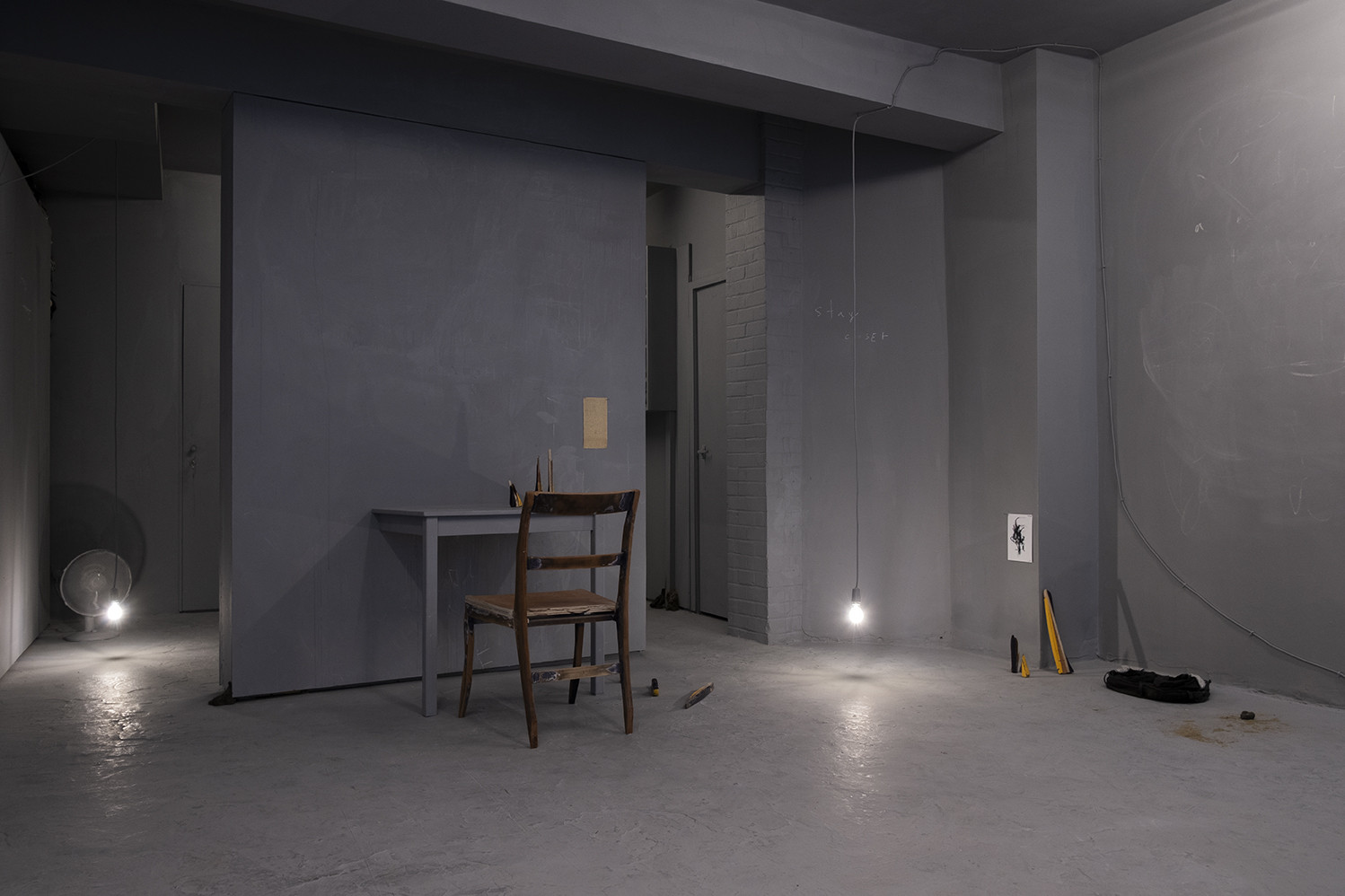 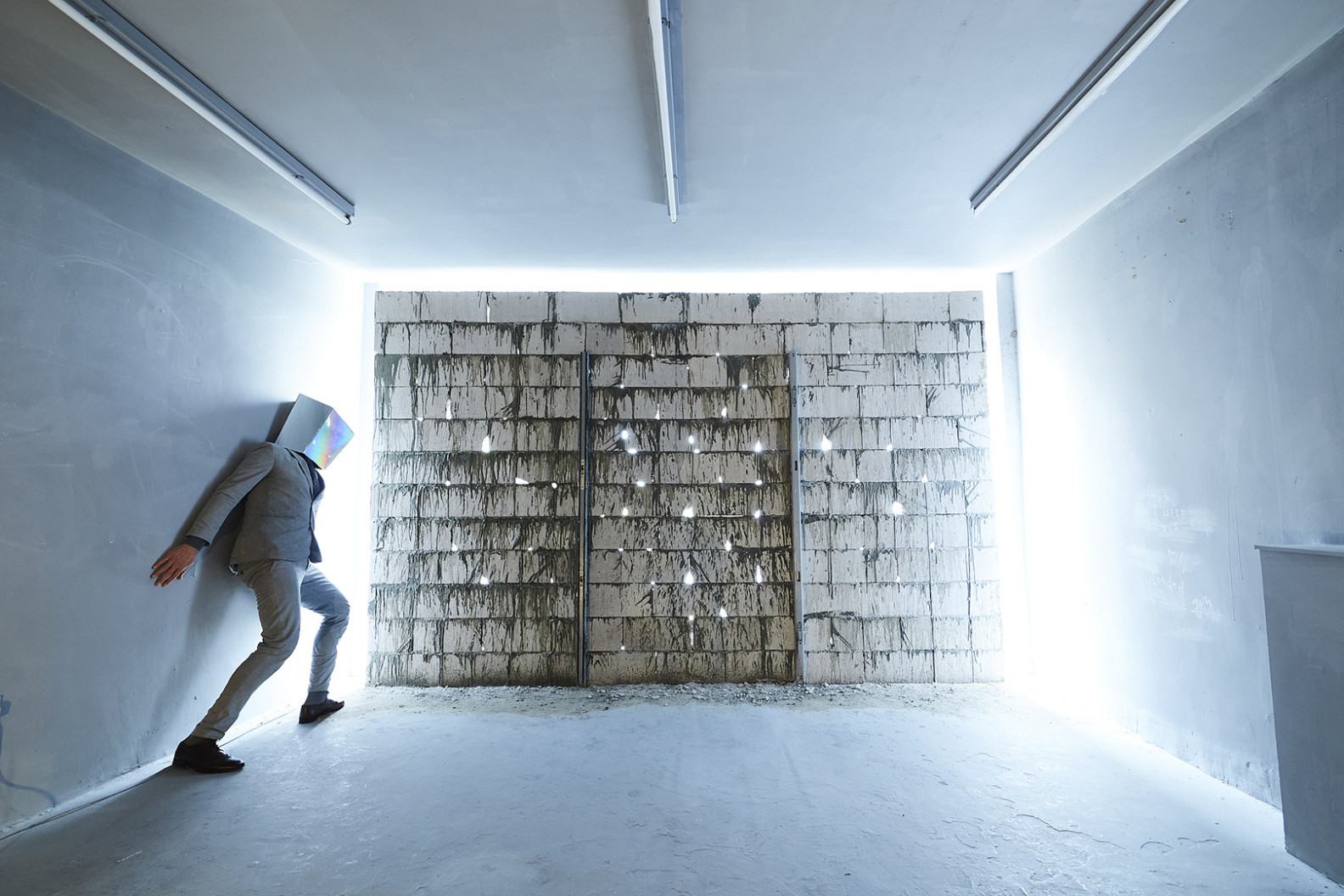 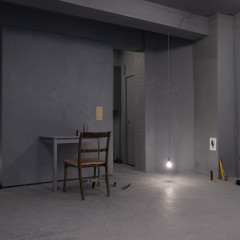 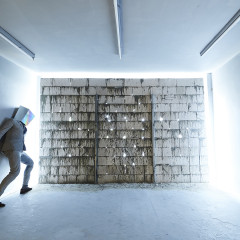 A brick wall covers the façade of 73 Tontine Street in Folkestone.

The culmination of a week-long performance intervention by Ljubljana-born artist, Jaša, a 90-minute light and sound performance was starting. Finding a small crowd of people gathered opposite the building’s entrance, watching intently as soundwaves began to send subtle vibrations across the street, a stranger turned to me.

“Have you looked inside?”

A series of jagged holes litter the brickwork - each one offering its own slightly different perspective on the unfolding events behind the wall. Tentatively I step forwards, purposefully aligning my gaze with the hole closest to eye-level, the most comfortable. Behind the wall lay an unsuspecting scene.

A desk, a wall of barely legible scrawlings, a laptop, a faceless figure in a hoodie - markers of the mundane blended with raw strikes of jarring abnormality. Sounds fluctuating from menacing whispers to piercing screams and partnered with the near constant buzz of electronic music, the walls vibrated as they fought to contain the building rage.

Between the unpredictability of flickering lights and shouts from which you could not pinpoint their origin, one thing remained constant - a presence.

No matter what sounds pushed their way through the cracks in the wall, how the level of noise shifted, how the shapes and movements inside choreographed themselves, you could not help becoming acutely aware of this presence. Like a small child peering in on their older siblings watching horror movies through the gaps in their fingers, there was something forbidden about the experience. As I stared through the gaps it was as though I had invaded this faceless figure, and somehow taken something from them, although I was unsure what.

As visitors were welcomed inside to view the gallery space from a new perspective, it was difficult not to feel a form of peculiar pity for that same presence. Alone in the room, though not physically, they were an outsider, a spectacle, something to be watched, marvelled at and then left once again to their solitude.

Returning to the crowd across the street, the same stranger turned to me once more.

“I was scared to look inside… What if it was just an office?”

Shielded by a seemingly mundane grey brick wall front, an illusion of protection, amidst the disconcerting sounds and the building mystery of the performance, the onlooker raised an important point. Though little preconceptions could be had of what lay behind the brickwork, if what was found inside could be summed up in two sentences, somehow, I would have felt short-changed.

Throughout the evening, the unassuming façade of 73 Tontine Street played host to a variety of visitors - some gathered to watch the events unfold, some passing by, oblivious to the street’s lively ongoings. Some approached the wall with intrigue, hoping to uncover its secrets, whilst others flinched and quickened their pace as abrasive noises projected from what was usually an innocuous spot on their route home. Some laughed, some danced, some shook their heads in confusion - but everyone seemed to walk away somewhat enchanted by the same sense of mystery.

What lay beyond the wall, though somewhat able to be described, was somehow still a mystery – an endless psychological labyrinth of intrigue, wonder and overwhelming anger. Like many others, I found myself approaching the wall with one question cluttering my mind, a simple, ‘What?’, but as I stepped away, I was faced with many more.

Who was the figure that resided behind the wall? Where did they come from? Why were they screaming in such sheer frustration?

The more I mulled these thoughts over, the less the answers seemed to matter.

The faceless figure was anyone - and everyone - a figurehead of a bubbling rage that has been building within almost all of us for the last 18 months, and for some even longer.

As the world emerges from a period of intense isolation in fragmented stages, there is a growing tendency to retrospectively encapsulate the current state of our collective time on Earth as something tinged with an inherent beauty.

Whilst it could be tempting to focus on the wonder of people once again able to gather to appreciate such a spectacle on a street that has stood silent for the better part of a year, or the magic of accidentally stumbling across such a source of visual escapism; throughout 90 minutes of agonising shouts and scenes of intense loneliness, Jaša dispels any misconceptions of the beauty in which we currently find ourselves.

The world can be – an often is - an ugly place, and many of us are more acutely aware of its wicked ways now than ever before. To me, ‘Lingering Cut’ does not reveal that there is some hidden blessing to be found in the world’s building frustration, but instead emphasises the importance in embracing feelings of discomfort, anger, and displacement for what they are.

We can see a brick wall, we can hear the alarming sounds and warning cries radiating from its occupant, and we are faced with a choice. We can walk on by paying little notice to the sound’s origins and try to fabricate a more palatable explanation for what we’re hearing - or we can stop.

If we look through the wall - past what may be comfortable - and dare to break down the barriers supposedly built to protect us, we see what is true. The silently screaming, the fractured voices of the voiceless, the mind-numbing absurdity of it all – it becomes clear.

This is a wakeup call. 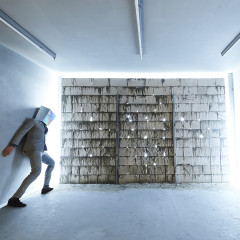 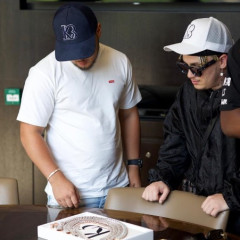