The King of Broken Things sees actress Cara Roberts play an unnamed young boy who fixes discarded objects and finds new uses for them. Through this setup and the monologue Roberts performs, ideas of broken families and people are explored during the 50 minute show.

This Theatresmiths production, written and directed by Michael Taylor Broderick, is partly saved from a complete descent into cheesiness by the simple fact of its lead character being a child. The script almost solely consists of cliched phrases such as “perfection is overrated” and “a broken thing, when fixed, is just as good as an unbroken thing”, which coming from an adult would sound entirely trite. However, these lines are suited to the childishness of Roberts’s performance, as the boy character is used as a theatrical channel for an optimistic outlook on life. The show’s intention to teach the audience to adopt such a positive mindset will either succeed or fall flat, depending on the individual.

The staging and props are the other main strength of this production. The titular broken things are scattered across the stage and Roberts interacts with each one and explains their creation to the audience. One such example is an “emotion calculator'', which is a broken computer and printer that are connected to a colourful glove. The boy holds the glove to his heart and the computer prints out a colour which supposedly corresponds to his emotional state, as he tells us “it used to come out black all the time”. Other impressive props include a broken flask turned into a mirrored vase and a figure made out of recycled objects that hang from strings. Some real time and effort has gone into the construction of these props and we feel the boy character’s joy in examining them.

The King of Broken Things isn’t for cynical audiences, but the props and Roberts’s continuously energetic performance lend cogency to the production. 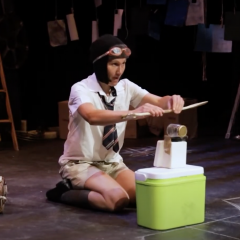