The ground- breaking Cinderella, by Rogers & Hammerstein's, is no longer 'Impossible' to find on your favourite streaming services. Disney+ have released news that the film would be gracing our screens, at the stroke of midnight on February 12th.

If you have never seen this version of Cinderella you will not be disappointed, as it contains: several stellar performances, an acclaimed cast and music from the late Whitney Houston. Therefore, making this Disney classic a must watch.

"Cinderella" first aired on American broadcasting station ABC with over 60 million people tuning in to see Whitney as the whimsical Godmother and Brandy's alternate feminist approach to the classic tale. It vastly became the most watched television musical of that decade and gained the attention of various industry awards such as several Emmy nominations.

Rodgers & Hammerstein's original songs that many consider timeless, includes the infamous "Impossible," " A Lovely Night," "Ten Minutes Ago" and  "Do I Love You Because You're Beautiful". They give this already amazing film an injection of soul that once you hear it's almost impossible to forget.

So, if you do watch this film, get ready for the longing desire to learn every lyric!

One of the most noteworthy features of this 1997 rendition is how they encapsulated the fairy tale but pushed for diverse representation and inclusivity, making it a focal point not a secondary thought, amongst the beautiful costumes and musical numbers.

It was unheard of at the time to have such a well-known classic, re told through the eyes of a black girl (Brandy Norwood) and swap out the tradition Prince Charming for (Paolo Montalban) a Filipino man. In todays society interracial couples are more common but back then this was earth shattering for many.

I'ts unorthodox cast choices made the film more appeasing to the public because it challenged every conventional norm and is celebrated because of this.

Therefore, making it perfect for today's audience and timely way for Disney+ to do their bit for Black History Month. Especially with the events of 2020 with Black Lives Matter and the trend of underage violence within the UK, its no surprise that they have made it a mandatory to showcase "Black Stories" on their platform.

It is amazing to know that this film, will now gain a whole new audience that will fall for the whimsey of this tale all over again. So get your snacks, invite your family and friends to indulge in the magic of the Rodgers & Hammerstein romance. 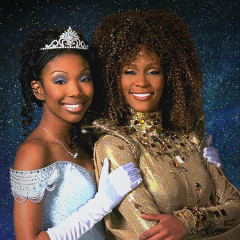