Ballet: I dreamt of doing it when I was little, I think most kids in my class did too. It’s just so magical, pure and gentle. The dancers glide across the stage like swans so gracefully. The auditorium is full, people of all ages have come to see this show, Peter and the Wolf, performed by Birmingham Royal Ballet. You can feel the excitement! Some are just like me as they haven’t been here before and this is all new, whilst others are here as tradition.  The stage is lit, the orchestra is preparing, and everybody is taking their seats, awaiting the show, the story. And then the lights go down, the first dancer appears from out of the wings, gliding across the stage as if it were ice.

Everything looks so effortless but from the pre-show talk, it is clear that this type of work requires hard work and discipline. The preparation leading up to this show consisted of hours upon hours of practice, including an hour and a half morning rehearsal which the dancers compared to ‘brushing teeth’, it was just routine. Shocking to many maybe, but just daily life for these dancers. Did their efforts pay off? Yes. However, I must admit that I preferred the second half of the show, the story of Peter and the Wolf. This was due to it being more animated and dynamic, the first half of the show took the traditional side of ballet. I wasn’t as keen on the first half of the show, I felt it was very repetitive and went on for longer than it should have. On the other hand, it was interesting to see the difference between traditional ballet and modern ballet. The contrast worked well, yet I personally felt that the second half could have been longer and the first half shortened as I mentioned before, the audience also seemed more engaged in the second half of the performance.

After seeing this show, I would return to view more ballet performances and I think that says it all. I was impressed and intrigued by the talent and tenderness of the dancers. They told a story through their bodies. I heard every word of it. I would definitely recommend this performance of the Birmingham Royal Ballet and it is for all age groups. 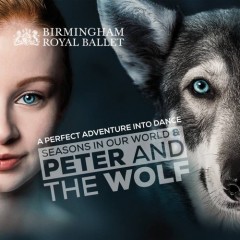