Voice MagReviewsBad Times At The El…

Times may be bad at the El Royale but they certainly make for good cinema.

Bad Times At the El Royale is conceptually pretty simple, four strangers arrive at the El Royale hotel, which straddles the border between Nevada and California -  marked by a red painted line splits the hotel completely in two. These four strangers (and the staff) all have something to hide, making the film increasingly complex and pushing it down a continually darkening path as it continues.

Whilst people might consider there to be five main characters, I believe there to be six; that sixth character being the El Royale itself. The entire film takes place within the confines of the motel, with each individual detail being meticulously designed by Hamish Purdy, creating a strange setting that's full of character. Perhaps the most distinctive part of the film's set design is the split between the California and Nevada sides of the hotel. Whilst the Californian side is glitzy and glamorous, Nevada is far more subtle and demure, and each room exemplifying the thematic character of the state they’re located in. The film truly has a firm sense of place throughout its entirety, with the locations within the hotel being very distinct from the jump. Alongside that, Bad Times At The El Royale has an incredibly specific sense of time. From the timely news report, to the clothes, to the music to the characters, they were all firmly placed in the time period. The musical choices in particular, and the way in which they both harmonise and are discordant with the action on screen, are successful in setting the peculiar and ever-changing tone of the film.

Another place where this time is most evident is in the characters - particularly Darlene Sweet (Cynthia Erivo) and Emily Summerspring (Dakota Johnson). Every element of their characters and performances make their status as women in the 1970s incredibly clear. This especially comes across with Cynthia Erivo's powerful performance, where there is a clear subtext of her black womanhood beneath every action, especially in her interactions with the rest of the cast. Extensively deep character is not exclusive to the women of the film, with every performance feeling individual and meticulous - notably Lewis Pullman as the receptionist Miles Miller. What is perhaps most interesting about these characters is how you genuinely feel like each of them could be the subject of their own film, and each of their personal lives/backstories feeling like they come from a different genre of film. Despite this, the mishmash of characters don't encroach upon the film's tone in any meaningful way.

This controlled weirdness is one of the most interesting parts of the film, not only being key to the acting performances, but also essential to the style of filmmaking used throughout. There are so many incredible shots where the set design synergises perfectly with Seamus McGarvey's cinematography - creating a deep and peculiar beauty. Director Drew Goddard never takes the easy route when it comes to filmmaking, always going for the more dramatic and unconventional choices. This is particularly well highlighted in the opening, where the we watch of Nick Offerman (playing Felix O'Kelly) in his hotel room over an extended period of time. The scene is filmed from one fixed perspective and jauntily edited together, with a contemporary song playing on the radio, ending in a shocking and dramatic way. This immediately establishes the film's weird and interesting visuals and tone.

It's undoubtable that this film has an incredible amount of style, however the valuing of style over coherence does create a messy third act, from the entrance of Chris Hemsworth onwards. In this act, there is a level of unpredictability that increases the intensity but also verges on incoherence - with some of the plott feeling a little bit contrived. But even then, the level of acting combined with the sheer level of emotion, heightened by the filmography, keep you on the wild and somewhat confusing ride.

What is possibly the most interesting element of the film is the way in which it conveys ideas around subjectivity. Throughout the entirety of Bad Times At The El Royale, both time and perspective are played with. Most memorably there is a pivotal moment that gets presented to us from three different viewpoints. This subjectivity is very present in the text, subtext and filmography (often feeling very impressionistic) but also in the viewer experience. Every element of the film is meticulously detailed, and it’s unlikely that you will catch everything on your first viewing. This creates an individual experience for each person, and offers a great opportunity to discuss the finer points with friends. On top of that, the film deliberately leaves a lot of the context surrounding the hotel and the characters ambiguous, which allows the viewer to create their own conceptions around the guests and the wider plot. This helps solidify a central questions of the film - is perception more important than reality?

Bad Times At The El Royale is a film rich with layers, offering a stylish and a cinematic experience that you'll be thinking about for a long time afterwards. 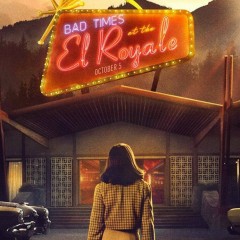 Times may be bad at the El Royale but they certainly make for good cinema.