Aside from the tragedy of the mass loss of life, 2020 has been a year of cancellations, postponing and closure. This has been particularly felt in the film industry with cinemas shutting (temporarily or permanently) across the globe. However, there are still a lot of worthwhile films that came out this year, many of them coming from places/people that don't often get the spotlight. So here's my top 10 from these films.

The Half of It

Coming from Alice Wu, indie darling writer/director of Saving Face, The Half of It is a very sweet high-school rom-com where a cash-strapped Ellie Chu (Leah Lewis) ends up helping a jock write letters to her crush. I wouldn’t say this film is groundbreaking, but it does nail what it’s going for. Every actor is giving a delightful performance (especially Lewis) and there is a deep earnestness and you can’t help but give in to its charm.

One of the few major studio films to be released this year, Birds of Prey is a fun romp about Harley Quinn (Margot Robbie) as she tries to extract herself from the wreckage of her relationship with the Joker. Everyone in the film clearly had a lot of fun and it shows. From the cinematography to the performances, to the outfits this is one hell of a time. The whole thing is a stylish, badass feminist romp which whole-heartedly embraces the silliness of the superhero genre.

Channing Godfrey Peoples makes her debut with an emotional, inspiring tale of the complicated roads Black women must walk in America, as she tries to get her daughter to win a local pageant which will get her a university education. In this film, you get the familiar repackaged with such tenderness you’ll forget that you’ve seen it before. The best moments aren’t grand duologues, but instead fixed shots of the two of them holding each other tight. It feels like it’s the two of them against the world and they’ll still come out on top.

Written and directed by Fernando Frias, in I’m No Longer Here, a Mexican teenager (played by Juan Daniel Garcia Treviño) has to flee to America after he gets caught up in local gang violence. As we’re shown his life in Mexico and the US concurrently, you begin to love his crew - the Tarkos. This group of kids obsessed with cumbia music is fun to watch and the general musicality of the film is fantastic. At the centre of it all, Treviño gives a phenomenal performance and more generally Frias weaves in some fascinating political commentary about US/Mexican relations and how that affects the people at the margins.

Warm and heartfelt, Rocks follows a young teenage girl (played by Bukky Bakray) and her group of friends as they try to look after her little brother in the wake of her single mum abandoning them. With a cast almost entirely composed of first time actors, there’s an authenticity and sincerity which Sarah Gavron (the director) brings out of these performers. Everyone in the ensemble does a brilliant job in painting this authentic portrait of life for ordinary teenage girls in London which you almost never get to see on screen.

Da 5 Bloods feels both timely and timeless, with Spike Lee doing what he does best — giving an unflinching and layered look at the connections between anti-Blackness, American identity, and American imperialism. At the center of this is the incredible Delroy Lindo, who swings between being hilarious, powerful and pitiful. It’s a performance that feels straight out of a Shakespearean tragedy. Most importantly, this film drives home the way Black lives have been devalued for centuries and how, irrespective of how much we give, oppression will not end without tearing these systems down.

In His House, we follow Sope Dirisu and Wunmi Mosaku, playing two of over 2 million South Sudanese refugees who have fled since the crisis started. They move into a new house and try to restart their lives in England. Whilst the obvious horror is in the eponymous house, the fears of this couple extend far beyond that. This place is alienating, hostile and cold to them. In his debut film, Remi Weekes twins the supernatural and the natural to tell a terrifying and very human story that is all too familiar to the refugees this country treats awfully.

The height of Steve McQueen’s Small Axe series of films for the BBC, Lovers Rock follows a house party in 80s West London. This isn’t a plot heavy film, but it doesn’t need to be. Instead you get all you need to know through watching the beautifully shot mass of bodies move through emotions – it’s a masterclass in ‘show don’t tell’. Also, there’s so much love and unity and pain in the extended shots of these people moving in stunning outfits and it all works brilliantly, making you wish that you were there.

This film is groundbreaking in a lot of ways, with Isabel Sandoval becoming the first openly trans female director to compete at the Venice International Film Festival. It isn’t just notable for the records that it breaks and the issues that it covers. Lingua Franca has a lot of layers. From queerness, to immigrant identity, to family, a lot of ground is covered and yet there’s a persistent subtlety and humanity that makes it all mesh together. However, at its core this is a love story, a messy and heart-wrenching one that really lands, playing an elegant symphony on your heartstrings from beginning to end.

Taking place a few years into the future, Bacurau follows a remote village in North Brazil as they come under attack from a malicious outside force. What follows is an incredible anti-Western, which is full of tension and powerful ensemble performances, set against the backdrop of a beautifully filmed rural landscape. There is also some incredible action at all the right moments that never feels gratuitous. This film takes its rightful place at the top of this list as a powerful genre-bending piece of anti-colonial filmmaking, showing the strength that can be found in community.

Think we've missed something? Let us know in the comments below! 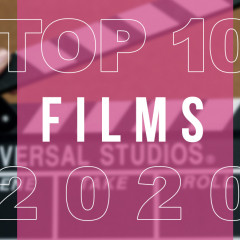