Another stand up who doesn’t really stand out

Gráinne Maguire’s Irish background plays a big part in the material for this show, which is amusing at times and uninspiring at others. Her stories of dates with sleazy men are among the funnier parts, although her obsession with The Sound of Music makes for some slightly lacklustre jokes.

As someone who is always right, Maguire feels secure in her stance on everything, and her comment on such a position does actually start to address the fact that we can so easily surround ourselves with our own opinions and never challenge our beliefs…until she stops and continues with the vaguely amusing jokes rather than that potentially interesting topic.

Much of her material feels like it goes on for too long; she continues trying to milk a joke long after it’s peaked. It also felt to me like she was reading from a script. Of course, I know most comedians do have a script, but making it sound natural, like a normal conversation between them and the audience, is for me much more enjoyable than when it sounds like they’re reciting something. It felt unnatural and artificial in numerous places, and I found my mind wandering more than once.

Gráinne Maguire: I Forgive You; Please Like Me is on at 15:15 at Gilded Balloon Teviot until August 26th. For more information and to purchase tickets, visit theEdFringe website. 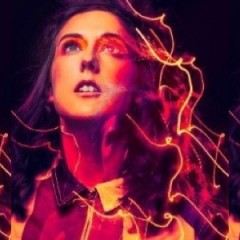 Another stand up who doesn’t really stand out