There’s so much talent in this show it’s unfair.

Chelsea Angell wows with her hoop skills; she is an elegant and beautiful performer with that perfect touch of sass. Kali Retallack, who is also in Casus: You & I, left me gaping in awe with her stunning aerial hoop performance, and Chris Thomas’ piece with the giant hoop is breathtaking. All are mesmerising, and a true privilege to watch.

As a true circus variety show, it has to have a touch of comedy, some of which comes in the form of Garry Starr. From Garry Starr performs everything, he comes onstage wearing a full period costume complete with neck ruffle and proceeds to, well, perform everything. From Shakespeare to slapstick, he is absolutely hilarious, and his rom-com section saw him get up close and personal with a few lucky audience members.

A charming compère by the name of Cal Harris presents each act, and provides some terrible jokes and freaky balloon up-the-nostril tricks in between each one. At the end, he also showcases his own talent in an incredible display of acrobatics with fellow performer Thomas Gorham, in an absolutely hilarious way.

All of the acts are brilliant, but the show is stolen, in my opinion, by The Amazing Mister Fish, who is not only an insanely talented circus performer, but also one of the funniest people I’ve ever seen onstage. He made me laugh so hard I couldn’t breathe, with jokes so simple or so ridiculous it was impossible not to laugh. He had the entire audience in hysterics, and performed incredible feats while he was at it. The Amazing Mister Fish is, in my eyes, a truly legendary performer, and I truly hope I am lucky enough to see him perform again one day.

This is the kind of show I’ve been waiting for; a show that excites me, a show that I leave with a grin on my face as I replay moments in my head. It’s brilliant. Don’t miss it.

Circus-Cision is on at 22:00 at Underbelly's Circus Hub on the Meadows until August 25th, excluding the 13th and 20th. For more information and to purchase tickets, visit the EdFringe website. 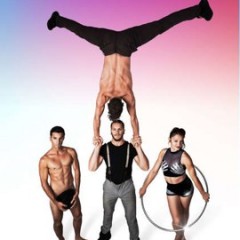