An audience can be the saving grace of a stand-up show.

The humour was honest and self-deprecating but not in a way that was particularly endearing. He admitted to being the type of uninformed millennial that older generations hate about millennials whilst himself trying to make fun of the overly sensitive millennial.

I can tell you the funniest parts of the show because they were not a part of Steel's routine: the cord falling out of his microphone; having a father with three daughters in his NSFW show; and an excellently tipsy audience member. There was a lot about the trials and tribulations of being nineteen or so and the stories had funny content and intention and being such a young debut comedian gave him a niche. I think, though, that the execution fell short – some anecdotes went on for too long and focussed on the less funny details.

He tells us he was once reviewed as "the voice of his generation" and riffs on how little he deserves that title with how apathetic the generation has become. His critique was very dry but prefaced it with the fact that he has no life experience on which to build a show.

There was a level of appreciation for the fact that he was so open about how the show is going with the technical problems and a hangover as well as jokes close to the bone. It worked to extend the apathetic style. With his Croydon accent, his somewhat grumpy critique was ironically like a much older, Jack Dee-esque comedian's. Prefacing his show with things like his lack of life experience and substantive opinions did end up making a lot of his show feel a bit too ill informed to laugh at.

He told us that the title only worked in a certain accent: I thought it worked and was witty and rubbishing it took away from a unique show with a lot of material to use.

Elliot Steel: Netflix 'n' Steel is on at 18:15 at the Gilded Balloon Counting House everyday until 28 August. For tickets and more information, visit the Fringe website. 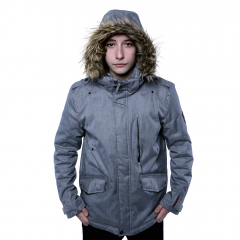 An audience can be the saving grace of a stand-up show.