Will we ever tire of Lili La Scala? Only time will tell because we're nowhere near yet.

Filled with the some of the best audience interaction at the Fringe, lots of glitz and glamour as well as a great deal of mess, AFVS returns packing out the King Dome every night. Her show is hilarious, dangerous, beautiful and altogether impressive. If you like your humour risqué, charming and naughty, too, this is the show for you.

This year she adds a tribute to David Bowie. Avid fans have rubbished the attempts of well-established musicians to pay tribute. La Scala's was understated and tasteful.

Zach & Viggo proved to be witty and inventive without any props or lighting – just themselves. The Magnets were simply electric. Griffin and Jones wowed the audience with a simple and low-tech card trick. Diamond and Tigress were wild and excellent in very different ways.

Once again, AFVS' lady with golden taste does not disappoint, she wows.

Lili La Scala: Another Fucking Variety Show is on at the Pleasance Dome, King Dome at 23:00 until 27 August (exc. 15, 22 August). For tickets and more information, visit the Fringe website. 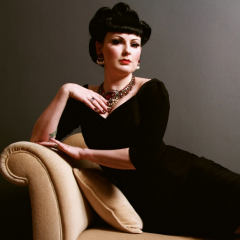 Will we ever tire of Lili La Scala? Only time will tell because we're nowhere near yet.