Crime Story is a festival in Newcastle upon Tyne which first occurred two years ago, with a series of talks held under the Crime Story name occurring last year. This year Crime Story was back, bigger than before, with a whole host of interesting speakers and subjects for the budding crime writer or the amateur reader-detective.

The event wasn't just a host of talks but a curated day structured around a specially written crime from best-selling novelist Paula Hawkins, author of The Girl on the Train. The story was a classic 'whodunnit' with a husband found stabbed in the chest, the wife covered in blood, and two as yet unknown figures who have been witnessed either in the street or visiting the house. The talks for the day were structured around this story, with three main panel sessions: 'The Police Investigation', 'The Forensic Investigation' and 'Inside the Courtroom', which looked at each stage of the criminal process with experts and professionals from the field including police officers, pathologists and barristers, as well as academics. These sessions were great in terms of getting an insight as to how an investigation or a court case actually works, and they were able to base their ideas on Hawkins' story while keeping the information flexible and generic too.

As the day went on a second part of the story was revealed, giving just enough information to intrigue and confuse the audience. This was followed by shorter 'breakout' sessions which covered a range of more specific topics such as true crime writing, digital forensics, forensic science etc. The two I attended were 'Understanding the Victim' and 'Forensic Psychiatry', both of which were focused more around understanding the people involved in crimes. These sessions were great as it meant you could choose what you did based on your interests and get more specific insight. Some were targeted at aspiring writers while other were more suited to readers, meaning there was something for everyone. My only wish was that we could have had more of these sessions, as each one was only offered once and there were a couple of others which I was really interested in.

We ended the day with Paula Hawkins reading the last part of her story: the big reveal! This was quite exciting and really interesting to hear about her ideas and writing process even behind this short piece. She was then interviewed more generally about The Girl on the Train, the upcoming movie, and new projects, and afterwards was signing books.

I really enjoyed the day and loved the structure being around an original crime, rather than simply being a series of talks. I definitely feel like this could be made more of, as we didn't solve the crime so much as guess the answer. It would have been great to see the crime interwoven into the day a little more, and to make it a bit more interactive, although I realise this would be difficult with such a large audience.

Overall this was a great event, and such a fantastic idea to make reading, writing and literature a bit more sociable and interactive. I would love to see this kind of event happen more often! 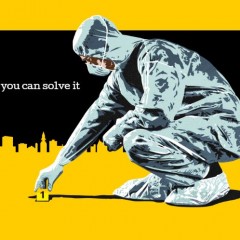