Another record-breaking album for the 32-year-old singer-songwriter.

A few months ago during her speech at the VMAs, Taylor Swift surprised her fans with the news of her upcoming new album, Midnights. After the success of Folklore and Evermore, Midnights was announced as her 10th studio album with brand new material. As her fans were waiting for the album to drop, Swift had a few more surprises.

From September 21 to October 7, the track titles were revealed through a series called Midnights Mayhem with Me featuring Taylor Swift herself and 13 ping pong balls. In this series, which took place on TikTok and Instagram reels, Swift would pick up a random ping pong ball with a number on it, and that would be the track title she would reveal. Later, Rolling Stone announced that all the collaborators on the album had been revealed, and included Jack Antonoff, Zoe Kravitz, Mark Anthony Spears, and - as Taylor Swift had revealed on her TikTok series - Lana Del Rey, who features on track 4, “Snow On the Beach”.

With growing expectations, hints, mayhem, and mystery, the album came out on October 21, causing Spotify to crash. But that was not it: a few hours later, Swift released 7 bonus tracks called 3 am Edition, the Anti hero music video, and the lyric videos for all 20 songs.

While this album represents a comeback to pop, it is also Swift’s darkest and most sincere album. With a few obvious hints at some of her past material, the album explores her insecurities, fears, hopes, and love life. As the album features a lot of synth sounds combined with original choruses and her usual bridges, Swift puts up an album that reminds us of Reputation and 1989, whilst still showing how much she’s grown.

Midnights doesn’t feature any singles, but this song really does sound like it could’ve been one. With confessional lyrics, Anti-Hero reflects on a vulnerable Taylor, who faces her fears and most intimate ideas. Following “Lavender Haze” and “Maroon”, the music shows her return to pop music after the indie- folk predecessors of Midnights, with an upbeat tempo and a brilliant chorus voice line combined with the organ and string synthesizers. This is the first track to get a music video, adding to Swift’s statement of the album being a concept itself.

Sweet Nothing is probably one of the sweetest songs and most personal songs in Midnights. Co-written with William Bowery (aka Joe Alwyn), its warm sound and lyrics, with the Rhodes organ accompaniment, make up a very particular sound. It creates a soft atmosphere. A simple song that contains just the right amount of contrast and movement; maybe, its simplicity relates to the lyrics, which reflect the comfort of feeling safe with someone. Towards the end, the imitative voice line and slight increase of the density direct us to a moment of climax that doesn’t really arrive completely. The voice line and the organ isolate again, giving the song exactly the end it needs.

All in all, Midnights is a five-star album. Exploring different sounds and possibilities, crossing genres, and displaying her lyrical genius at its finest, Taylor Swift marks a return to her pop style, with a hint to an experimental phase of which I’d like to see more of.

Header Image Credit: "Taylor Swift 2" by marcen27 is licensed under CC BY 2.0. 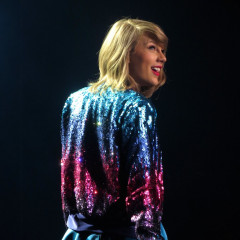 Another record-breaking album for the 32-year-old singer-songwriter.