Fusing spoken word, dance music and monologues are no easy feat, but Alex Roberts sure makes it look like it’s easy. In a physically and emotionally demanding piece, Roberts switches between two characters with the rapid switch of a cap. Already the winner of the Les Enfants Terribles Award 2022, Roberts’ piece No Place Like Home poses the question of whether LGBTQ+ safe spaces are always safe.

It’s a fascinating and challenging concept to tackle. As an audience member, navigating through what is quite a complex topic feels a lot like dancing through a song that you don’t know all the lyrics to. However, Roberts' performance is full of boundless energy that never misses a beat – so we find ourselves guided through the plot with ease.

We meet the character Connor, who has a certain innocence about him. He goes to a gay bar, and meets Rob – the opposite, Rob is mature and well-versed. It’s pure joy, euphoric even, between the two in this club. It’s the start of a generic story you think you’ve heard before. However, the way it’s presented is unique to No Place Like Home.

Visually striking projections move seamlessly across the wall, bringing colour and vivacity to this club setting. The dance music is thumpingly loud, and even though it’s just Roberts technically on stage – the atmosphere that is captured is close to the real thing, and the immersion into the plot gets to the point where you don’t really think about the fact there’s just one person on stage. That’s a testament to Roberts’ acting, but also the production itself with its set design, lighting and music – it truly all comes together to create a sweaty, breathless and dance-filled hour.

Roberts plays both with absolute clear distinction that becomes increasingly turbulent to navigate at the end of the piece when the two are both involved in a brutal attack – No Place Like Home bills itself on “who’s the victim and who’s the perpetrator?” another question that Roberts’ has us scrambling find the answer to.

One of the principal songs shown in No Place Like Home is Whitney Houston’s How Will I Know. The lyrics of this song trace the plot seamlessly, it is very much a tale where “there’s a boy” who “takes you to the stars above”. However, the bait and switch in the plot is a brutal attack involving both Connor and Rob – “oh I lose control, can’t seem to get enough. When I wake from dreaming, tell me is this really love?”. The plot turns sinister and darker – it is completely disarming and unexpected. Roberts’ initial depiction of joy is a far cry from the loss of innocence and brutality of the final scenes.

Roberts’ writing doesn’t provide answers but does set a straightforward question at the end. Roberts asks us whether queer venues are always the safe spaces that we expect them to be, and explores this with grit and sensitivity. It is an electric and thought-provoking production, and one to look out for at the Edinburgh Fringe Festival this year. 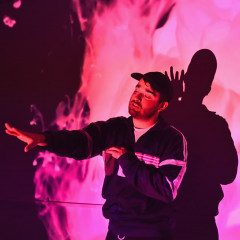