Strolling into Sugar Daddy, I wasn’t really sure what to expect. Rightfully so. The only thing I am certain of is the fact my email search history is a bit sus now after trying to find my e-ticket, and also that Sam Morrison is a star.

Not to be dramatic, but he really is. Grief isn’t a subject one makes fun of lightly, but Morrison made a whole crowd full-on cackle over death. If grief were a crystal, Morrison lifts it to the light and magnifies a whole different perspective on it with his rib-tickling anecdotes. It’s dark, moving, and just quite hilarious. Sugar Daddy is a show where Morrison grapples with the death of his older partner, and it’s incredibly captivating.

Morrison takes us on an incredibly profound journey from the time he was nearly robbed but refused to hand over his phone containing photos of his late partner (despite the photos being saved to iCloud), his diabetes, age-gap relationship, and that one time he just shouted at seagulls (why not, they deserve it).

Morrison’s comedy narrative is a solid foundation, and his comedic digressions are massively entertaining from his sex stories to fancying older, larger men – Morrison is just a natural entertainer, and we’re robbed that we can only listen to him for an hour.

The subject matter is tragic to the point that all you can do really is laugh, or cry – I did both. It’s a show that honours his partner, and as Morrison tells us, it’s a story that he has to tell. He has all the animation and high spirit of a friend you haven’t met in a while, but you’re catching up over a drink – we’re latched on to every single word.

Morrison beautifully weaves clever one-liners and witty anecdotes into this story of grief. At times, it even reads poetic – especially when Morrison evaluates grief through a Shakespearean lens. According to Morrison, we are taught to hold tragedy and comedy in separate hands but the reality is that the two are intrinsically interlinked. Come to the end, Morrison turns to share some wisdom which (frankly) is a tear-jerking moment “Like tragedy and comedy, grief and loss are held in the same hand”. How Morrison can make us laugh about crying, cry laugh and then just straight-up waterworks is an entire mystery. It's a testament to Morrison as a well-versed storyteller, and the audience exists in his hands in Sugar Daddy.

Sugar Daddy is an incredibly entertaining show, where we are welcomed to the intersection of tragedy and comedy – but we’re welcomed with absolutely open arms. It’s not an hour of mourning. It’s an hour where Morrison is unashamedly honest, unfiltered and unbothered by what anyone thinks – this is his story, and he owns it. 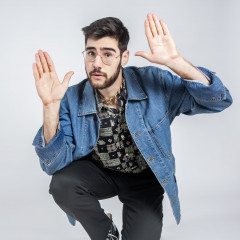