Greeted by very helpful and smiling front of house staff and shown in to a (relatively) comfortable auditorium the scene is set for what becomes a show the likes of which I’ve not seen before, combining storytelling, incredible skill and a largely non-verbal portrayal of a cast exploring gender archetypes from the birth of humanity.

Completely appropriate for families with older children to enjoy; this would be a wonderful introduction to the power of storytelling through the arts, regardless of first language, and a great introduction to physical theatre and contemporary dance both offered in enjoyable doses alongside some musical performances and circus acts.

The show opens with some apple play – no, not the car entertainment system. This simple device shows the start of a journey and provides a central focus for the first in many strong storytelling dance pieces.

What helps the performance from the off is the strong soundscape. In fact the sound design is spot on throughout the show; blending calming moments with those of frantic times, providing live soundscapes alongside recorded music, live singing and recorded speeches taken from snippets in time.

In addition to the excellent soundscape, you can tell how hard the lighting team have worked too. Every element of this production works in harmony, supporting the story, the emotions, and highlights key moments in the production whether it’s an ensemble or solo act.

The cast portray their range of characters in a convincing way, aided by some excellent costumes and providing some of the most remarkable performances I have ever seen. For me the work on the trapeze was a particular highlight – demonstrating technical complexity in their moves, entwining artists in mind blowing ways and forming shapes you can’t help but stare at. Another moment of note was the daring performances with Diabolo, including perfect timing to end with the music.

Among the ingenious aspects of the show include the clever use of scaffold structures, using costume fabrics to aid sliding across the stage, and the use of slapstick comedy to provide a reprieve to some of the deeper elements of the production.

On the story side, there is a poignant point made about consent; tackling the traditional use of Disney princesses and fairy tales as helpless female figures requiring rescue. This whole story line is excellently conveyed and explored using contemporary arts and is a masterclass for any performing arts teachers out there.

Among the many unsaid spectacular moments is the trampolining and the acrobalancing which left the crowd saying ‘No way’, and truly must be seen to be believed.

As the show makes clear, both men and woman can be strong and sensitive. Watch this production to explore gender in a whole new way and experience exceptional skill from everyone involved.

Relaxed performances are on offer on 17th & 24th August. Go see this production.

Below is the teaser video produced for this show... 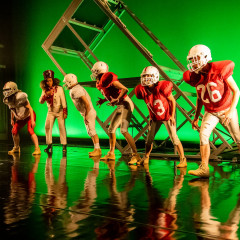