This New Creatives short film is an abstract representation of grief told through the eyes of a mother who has lost her son.

Black Fish is about a grieving mother who discovers pictures of her son and the life he would have lived if he hadn’t passed away. It takes a look at grief and its woes, and despite the short 5-minute runtime, it does a great job of portraying it.

Black Fish opens with a woman’s hand rearranging the glowing green stars on her ceiling, seemingly as she sleeps. It then cuts to a fishbowl occupied by a single black moor goldfish. The woman wakes up and removes the goldfish from the bowl, when it suddenly turns into a small black pill. She moves as though she is going to swallow the pill, but changes her mind, placing it back into the fishbowl, where it turns back into the goldfish it started as. If you’re confused, don’t worry – the rest of this short is just as odd as the beginning, and there is never much emphasis placed on explanations. It all feels rather oneiric, and plays as a sort of abstract representation of grief more than anything.

The titular black goldfish feels emblematic of grief, too. The term “black dog” has long been used to describe depression, and it seems here that a dog has been substituted for fish. There are also countless famous metaphors surrounding fish and fish bowls to describe grief and depression too. As the film is about a woman who lost her son, perhaps the metamorphosis of the fish into a pill that the woman decides not to swallow is a metaphor for being unable to swallow her grief, i.e. unable to cope with her loss.

Eventually the grieving woman finds pictures that are dated as 2027, and it becomes clear that she is looking at pictures of the life her son would have had if he had lived. Her (presumably) husband comes in, gives her another black pill that she only pretends to take, and they leave the room. It’s all rather abstract. There is no dialogue in the whole 5 minutes, and it’s never clear if the events depicted are actually happening or if it’s purely metaphorical (though the latter seems likely). While this can be interesting, and sort of suitable for what it’s about (considering how difficult it can be to put grief into words, abstraction and metaphors feel like an obvious route to take), it also feels a tad too simple. If you have nothing but abstract representations and metaphors, it’s going to be much harder to craft a short film that genuinely interests or enthrals you.

The imagery is intriguing and somewhat memorable, and it certainly feels like an accurate representation of grief, so for the most part, Black Fish is pretty much everything it aspires to be. The only problem is that it could have aspired to be more. 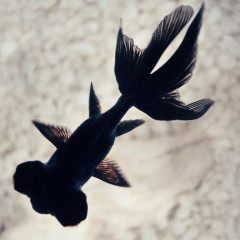 This New Creatives short film is an abstract representation of grief told through the eyes of a mother who has lost her son.