Are we too late? Bryony Bates’ experimental New Creatives audio piece disorientates an entire landscape of voices and calls for urgency to those asleep at the wheel during the world’s sixth mass extinction.

What does veganism, linguistics, cockroaches, and Shakespeare have in common? Coleoptera is an experimental sound collage written by Bryony Bates that cleverly pulls these threads together to create a chorus of urgency in the wake of the world’s sixth mass extinction.

The BBC New Creatives audio piece is composed of a number of clashing perspectives. It begins with a gentle description of beetles as the first pollinators burrowing themselves into flowers far before bees or wasps did. The lilting delivery is reminiscent of nature documentaries which disarms the listener into believing the piece is familiar territory. A safe space to idly stand back and observe. Instead, Bates hurls the listener into etymology, theory and constructed debate. In doing so, the piece traces the cause of mass biodiversity loss to humanity’s inability to simply listen.

There is an innate discomfort created by the sound design. It is accelerated by the rattling sound of insects moving around. These jarring sounds unpredictably scatter over the piece, instilling a quickening pace and rhythm that feels overwhelming. It is completely fitting for the theme of death, a subject that general conversation avoids.

The multiplicity of voices creates a disorientating effect. The listener is reduced to a cockroach on the wall, listening to contradictions and arguments. At times the intersecting and overlapping does mean that the piece is difficult to keep up with. Which voice should one listen to? Some are matter-of-fact and informative, others are demanding ‘Shut up, eat a burger’.

In Coleoptera, it is more appropriate to ask which voice one should choose to listen to.

The final voice feels like familiar ground - ‘I’m lost, I don’t know where I’m going. I think what I’m trying to say is that we have so much and so little’. There are no voices climbing upon the next in an attempt to drown them out. It dulls down to a voice that resembles an entire collective of people who just don’t know where they stand — ‘We’re only just waking up to it. Too late’.

With focus pulled from singular viewpoints of literature, history and science. What remains in Coleoptera is the lasting image that humans in their masses are more similar to beetles than one might initially think. If they are to go into extinction, where does that possibly leave us? In this chaotic landscape, how can we arise to the sound of our own voice? 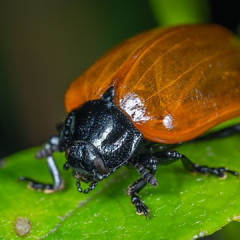 Are we too late? Bryony Bates’ experimental New Creatives audio piece disorientates an entire landscape of voices and calls for urgency to those asleep at the wheel during the world’s sixth mass extinction.