The newest entry into the most meta franchise in Hollywood rears its ghost-faced head, and it's bad. How bad you ask? Let's find out.

Overall there is one genuinely good Scream movie. As for the rest, well, beauty is in the eye of the beholder. Dealer's choice, as they say; it's up to you to decide how much you enjoy the cheesy but undeniably fun follow-ups to the original classic. But Scream 5 isn't looking to let you choose. What the film is trying to do, in its two hour block of meta, genre-ribbing, murder-sprees, is tell you that 'yeah, we're a good film, and do you want to know why? Because we know how bad we are.'

Seriously, 80% of the dialogue is just this:

Character: 'Wouldn't it be so stupid if I did this?'

*Proceeds to do the thing they said was stupid and dies*

How far can a franchise go if its main feature is that it's predictable? There are zero surprises in this film. No, I do not count the 'killer-reveal scene' to be a surprise. You could copy and paste any of the suspects into the role of Ghostface and it would do nothing to change the plot. A twist is only good if its foreshadowing is sewn into the fabric of the narrative; here the writers probably chose their killer by throwing darts at a board.

The dialogue is bad. Not in the sense that it's poorly written or doesn't manage to achieve what it's trying to achieve. No, the dialogue is bad because what it's trying to achieve is not worth achieving. Genuine talent and effort appears to have gone into making every line in this movie a smarmy, self-referential dig at horror. I mean how many milquetoast monologues breaking down the tropes of the genre do we have to suffer through? There were at least five in one scene alone, it was outright boring by the time we got to the third act. I get that Scream is supposed to be a meta-horror but please remember to leave room for actual dialogue that moves the plot forward or develops the characters.

The only saving grace was that it was pretty funny. That's what it had to offer. Pretty funny, and competently made. Although even then the best jokes were the ones that were pointing out how terrible the plot was, and I only found these funny because I agreed so wholeheartedly with them. You know why this film is so irritating? It feels like when a company's social media account badmouths itself. Like, 'hey we get it, we think capitalism is bad too, you should buy our products but ironically ahaha.' It just irks me.

And yeah, I get how ironic it is that I'm ranting about a film that makes a point of criticising toxic fans, but my defense against that is that I'm not a Scream fan, I just like it when movies are good. Putting aside my sneering veneer for a moment, there isn't really anything wrong with how this film is constructed. The cinematography is good, the set-pieces are done right (even if they're cliche), and the acting is all fine – better than most goofy horrors. Even the dialogue, despite being utterly exhausting, was composed effectively enough to suggest that the writers would do a good job on any other movie. Really, the problem is Scream itself. It should never have been a franchise. The first one was excellent because it was needed. It came in the midst of the slasher-decade — if any genre begged for a parody it was that one. You would need an exceptionally talented screenwriter to make a satisfying sequel, especially one that's relevant to the modern day. Slashers just aren't good or popular enough to warrant satire. Good on Scream 5 for referencing elevated horrors like The Babadook and Get Out, but all that really did was make me wish I was watching them instead.

If I had to sum up Scream 5 in one word it would be ‘exhausting’. Characters do dumb, predictable things in a plot with more holes than a bagel factory, and no matter many times the movie itself points this out, it doesn't get any better.

Header Image Credit: "halloween screaming mask" by creepyhalloweenimages is licensed under CC BY 2.0 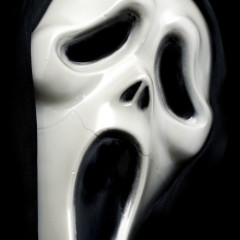 The newest entry into the most meta franchise in Hollywood rears its ghost-faced head, and it's bad. How bad you ask? Let's find out.