Guards following Priti Patel’s advice to ‘push back’ boats of refugees could be exempt from prosecution if their actions prove lethal.

Officials have confirmed that Border Force officers who follow Priti Patel’s orders to “push back” boats of refugees could be granted legal immunity in the event of ensuing refugees’ deaths. Home secretary Patel is looking for the nationality and borders bill to include allowances for UK officials whose actions result in casualties such as drowning.

The Home Office declared last month that Border Force guards were being trained to push back small boats trying to cross the Channel in search of asylum. Existing laws could make it possible that guards would be legally liable if such actions caused the boat’s passengers to drown or become endangered, but the new bill contains a clause which could allow them legal protection if their actions were lethal.

The section of the bill that seems to give legal protection in such an event is schedule 4A, part A1, paragraph J1, and reads:

“A relevant officer is not liable in any criminal or civil proceedings for anything done in the purported performance of functions under this part of this schedule if the court is satisfied that (a) the act was done in good faith, and (b) there were reasonable grounds for doing it.”

The bill is at the committee stage, and would also include measures to deny entry and even imprison people who enter the UK via illegal routes such as small boats crossing the Channel. The measure would see refugees have their claims ruled inadmissible, have no access to public funding, receive up to four years jail time, and have their families prohibited from joining them.

The objectives of the bill are reportedly to make the asylum system fairer, yet also to remove people who have been judged as having no right to enter the country and to overall further deter refugees from trying to reach the UK.

The Home Office has defended the bill and the particular clause, with a spokesperson saying: “As part of our ongoing response to these dangerous crossings, we continue to evaluate and test a range of safe and legal options for stopping small boats […] All operational procedures used at sea comply and are delivered in accordance with domestic and international law.”

Immigration barrister and author Colin Yeo attempted to provide some reassurance on the matter, stating that the clause would not absolutely guarantee officers exemption from prosecution, and that they still could be tried under maritime or domestic laws. He noted: “There are two qualifiers in the provision and it is hard to see how it could be reasonable to leave someone to either drown at sea or in a small boat which doesn’t have enough fuel to reach land”. 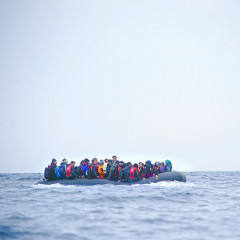 UK Border Force could have immunity over refugee deaths

Guards following Priti Patel’s advice to ‘push back’ boats of refugees could be exempt from prosecution if their actions prove lethal.