Advertised as pay-what-you-can (with a suggested donation of £3), Pink Peacock's handcuff keys come in response to concerns over the safety of climate activists during COP26. With a significant increase in social action against climate change during the last five years, COP26 is expected to foment a sharp spike in social demonstrations in the Glasgow area. Pink Peacock have made their stance known by providing access to the escape tools.

The product description reads: "Did you know it's legal to carry a standard police issue handcuff key in the UK? If you get cuffed during an action and you have this to hand, your wrists and comrades will thank you."

It goes on to warn potential buyers that: "Keep in mind that if a cop spots the handcuff key, or notices that you've escaped from their handcuffs, they might use that as justification to escalate force used against you and could try to charge you with 'obstructing a police officer'. Be safe."

Police Scotland have retaliated against the café, with Assistant Chief Constable Bernard Higgins stating: "If anyone tries to use one of these keys to open handcuffs while in lawful custody, they are likely to be charged with obstruction or obstruction of a police officer"

Additionally, Higgins assured anyone in possession of the keys would be charged with assisting in the escape of a person in custody should they attempt to release someone else from police handcuffs.

Pink Peacock have said: "We trust you to make informed decisions about which tools are best for you."

The café can be found in the Southside of Glasgow and describes itself as "a queer, yiddish, pay-what-you-can café", where everyone is welcome, "(except cops and terfs)".

They are also members of the National Food Service, are dedicated to following the social model of disability, and promote a "do no harm, take no bulls**t" ideology.

Header Image Credit: "Handcuffs with black background" by JobsForFelonsHub is licensed under CC BY 2.0 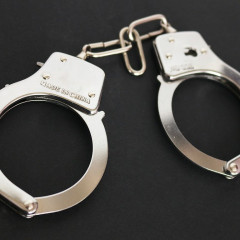 Glasgow café hands out handcuff keys ahead of COP26