Daily meat consumption in the UK has fallen by 17%, finds a new study published in the journal the Lancet Planetary Health. However, reduction must come quicker to meet a national target set by the National Food Strategy aimed at reducing the environmental impact of food consumption, say scientists.

The goal set by the National Food Strategy calls for meat consumption in the UK to fall by 30% over the next 10 years and is based on analysis of the entire UK food system including farming, sustainability, production, and hunger. Lead researcher Dr Cristina Stewart from the University of Oxford said, "We now know we need a more substantial reduction".

The study published in Lancet Planetary Health has also revealed that although most people are now eating less red and processed meat than a decade prior, the consumption of white meat has in fact increased. This may stem from a greater awareness of the negative health implications of eating large amounts of red and processed meat, such as type 2 diabetes and cardiovascular diseases.

Meat production and animal farming also have a more significant environmental impact than other types of agricultural food production, with meat and dairy accounting for 14.5% of greenhouse gas emissions worldwide according to the UN’s Food and Agricultural Organization.

Dr Stewart has noted that a switch to eating less meat may be easier than people expect, saying, "You don't have to be vegetarian, although, in general, meat-free dishes will have a lower impact. But if you're someone that eats meat every day, reducing your meat consumption by 30% just looks like having two meat-free days per week."

The team at the University of Oxford are conducting an ongoing study into what helps people to reduce their meat consumption, and have suggested simple strategies that proved helpful with study participants. The recommendations include trying one new vegetarian recipe, making only one meal a day vegetarian, and reducing portion size, perhaps by supplementing some of the meat for alternative products or vegetables.

Dr Stewart concluded, "Hopefully this paper will help us understand the patterns and trends so we can tailor public health policies and behavioural nudges to help people choose more sustainable options". 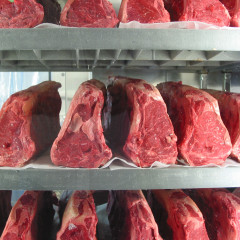