Voice MagNewsWomen reign at The B…

This year's Brit Awards saw women dominate. Wins for Dua Lipa, Billie Ellish, and Little Mix as the first all-female winner for British group made this night one to remember.

Her heart warming speech called for Boris Johnson to approve “a fair pay rise” for frontline NHS staff. “It’s very good to clap for [frontline NHS staff], but we need to pay them,” Lipa stated as she dedicated her award to healthcare pioneer Dame Elizabeth.

She then went on to dedicate her album award to Folajimi Olubunmi-Adewole and Joaquin Garcia who saved a woman who had fallen in the river Thames in April, calling for the Brits to create a bravery award in their honor. Dua Lipa is now a rightful winner of five Brit Awards, cementing her position as one of the UK’s most successful pop stars.

The fact that it’s taken this long for a female group to receive this accolade shows how male dominated the UK is, and Leigh-Anne Pinnock highlighted this saying: “It’s not easy being a female in the UK pop industry. We’ve seen the white male dominance, misogyny, sexism and lack of diversity. We’re proud of how we’ve stuck together, stood our ground, surrounded ourselves with strong women and are now using our voices more than ever.”

Swift gave a poignant speech further addressing the hardship of being a woman within the industry. “There is no career path that comes free of negativity,” she said on receiving the award in person. “If you’re met with resistance that probably means that you’re doing something new.”

This industry shift of recognising women at award ceremonies has been a refreshing sight, as last year the Brits was heavily criticised for their prominent male bias. Mable was the only female pop singer nominated across 25 categories.

It may be hard to create an even keel at award ceremonies with genre, ethnic representation and gender but it's amazing to see that The Brits are trying to meet the standard. 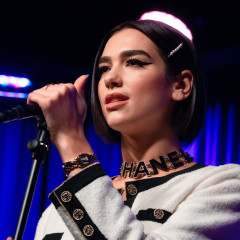 Women reign at The BRIT Awards 2021

This year's Brit Awards saw women dominate. Wins for Dua Lipa, Billie Ellish, and Little Mix as the first all-female winner for British group made this night one to remember.