Rose Ayling-Ellis and her partner Giovanni Pernice took home the glitterball trophy as the audience and judges' propelled them to victory as the winners of Strictly Come Dancing 2021.

Eastenders star Rose Ayling-Ellis and her professional dance partner Giovanni Pernice were crowned the victors of this year's series of Strictly Come Dancing, with Rose describing the experience as "life-changing". Rose had already made history as the first deaf participant of Strictly Come Dancing, and has now become the first deaf winner of the show.

The finale aired on BBC One on 18 December to an average audience of 11 million, peaking at 12.3 million. They beat out the first all male partnership in Strictly history, The Great British Bake Off's John Whaite and his partner Johannes Radebe. Ordinarily, there would have been a third couple, but AJ Odudu had to pull out due to an injury in her ankle just days before the event.

The winning couple began their bid for the trophy with a quickstep to the theme of Frozen, which received adulation from the judges, who asked for the dance to be repeated. It received a near-perfect score of 39. They followed it up with a reprisal of their breathtaking Couple's Choice routine, which earned a perfect 40. Similarly their final performance, a Romeo and Juliet-themed showdance, also garnered a stream of perfect 10s.

Amazingly, there was an exact tie in the judges' scores between Rose/Giovanni and John/Johannes, which meant the audience vote would be the deciding factor. Whilst the BBC do not release specific audience voting statistics for fear of affecting the vote, it was revealed that the public had decided to make Rose Ayling-Ellis and her partner their champion of Strictly 2021.

Rose has talked about how impactful her participation in the immensely popular dance contest has been on her personal life. "I’ve become more me than I’ve ever been because of Strictly", she explained, "I feel more confident. On the first week, I was really shy, but now I can be myself, and I definitely feel more comfortable in my own skin. The first week, I was like, ‘Everyone’s going to be expecting a deaf person to dance really badly. But I definitely proved a lot of people wrong.”

When she was first revealed she said that "to be the first deaf contestant on Strictly Come Dancing is sooooo exciting... and a little bit scary." She more than rose to the occasion however.

“For Rose Ayling-Ellis to have starred week after week on Saturday night primetime – and then lift the glitterball trophy – is a massive step forward. However, there is still a very long way to go until disabled people are featured fairly on screen.

"There are 14.1 million disabled people in the UK and their lives and stories are not being told. Seeing disabled people on TV will only help improve understanding and break down barriers. So, the fact that Rose’s journey has been beamed into living rooms week in, week out is excellent progress and must be the start of real change.”

Rose explained that, contrary to popular belief, she did not listen to the vibrations of the music in order to dance in time with the band. Instead, she committed to meticulously learning each and every step of the dance until it was ingrained in her muscle memory. Only keeping to the vibrations would have left too much room for variation. She praised her partner, Giovanni, for his guidance.

"There are a lot of ups and downs and some dances are harder than others. But Giovanni is such a good teacher, and he’s really adapted to the way I learn, rather than making me learn it in his way."

Rose Ayling-Ellis returned to Deafinitely Theatre in London during the show, a deaf-led theatre company that she previously worked with. The group works with deaf theatre makers to put on critically acclaimed bilingual shows for both deaf and hearing audiences; they are also an Arts Award centre. 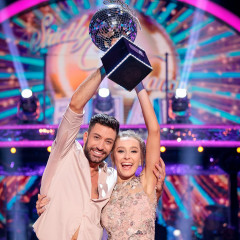 Rose Ayling-Ellis and her partner Giovanni Pernice took home the glitterball trophy as the audience and judges' propelled them to victory as the winners of Strictly Come Dancing 2021.