A new 'Metaverse Category' at the British Fashion Council's Annual Fashion Awards has seen its entire shortlist taken up by Roblox content creators.

The British Fashion Council have tossed their stylish hat into the metaverse ring — a metaverse being a virtual online space that people can explore through the internet, often using VR (virtual reality) technology — by adding a new 'Metaverse Category' to its Annual Fashion Awards. The award was created in partnership with the Roblox Corporation, which is the company that owns Roblox. As such, the shortlist for the Metaverse Design award consisted of five Roblox content creators, with the winner being cSapphire, a fashion designer who operates a clothing boutique within the Roblox game engine.

Those who virtually attended the award were able to explore a version of the Royal Albert Hall created using the Roblox game engine. Alessandro Michele, Creative Director of Gucci, presented the award using an in-game avatar of himself.

"This unique metaverse space BFC has created in collaboration with Roblox represents the future of fashion, and it’s been so fun to be a part of such an innovative experience,” model Karlie Kloss, who served as one of the judges, said in a statement.

The British Fashion Council hosted the Fashion Awards 2021 presented by Tik-Tok in the Royal Albert Hall in London. The awards celebrate the creativity and ingenuity of fashion designers and companies operating over the last twelve months. The event helps fund the British Fashion Council year-round work promoting and developing new voices in British fashion through grants, education, and business mentoring.

Partnering with Tik-Tok to host the awards was a bold decision, which carried the risk of putting off established industry figureheads, particularly due to the fact that Tik-Tok was given a high level of control over the guestlist and programme. Many Tik-Tok creators were invited to the event, and content creator stations were put in place. James Stafford, head of partnerships and community at TikTok in the UK, has said: “We want to recognize the fashion creators on TikTok, bring them closer to fashion and help people in fashion understand where trends are coming from or be a bit more playful than they have been comfortable doing maybe elsewhere on the Internet,”

This desire to make the fashion industry more accessible may be a factor in the inclusion of Roblox. Roblox is an online multiplayer sandbox game in which users can create their own worlds using the game engine. Oftentimes, the various servers used by players will be dedicated to roleplaying environments, online events, and quirky minigames. The game has existed since 2006, and has over 43.2 million daily users according to recent estimates.

In recognition of the event, Roblox released a special in-game event titled 'The Fashion Awards 2021'. In it, players could go through the virtual venue and complete a number of quests, including posing in certain spots around the stage, in order to unlock a character customisation option: British Fashion Council gold opera glasses.

This isn't the first time Roblox and the fashion industry have collided. In May earlier this year, Gucci ran a 15-day fashion event in the game which boasted a number of surreal visuals and over 30 unique clothing options that players could purchase using 'Robux', the in-game currency.

Companies like Facebook and Epic Games have been pushing the idea of a metaverse forward in recent months, with Facebook rebranding its parent organisation to Meta, and the idea has seen increased attention due to its viability in situations like the Covid-19 pandemic. It remains to be seen how popular the concept will be amongst the wider population, with some praising its accessibility, and others criticising its potential impact on real-world creatives. 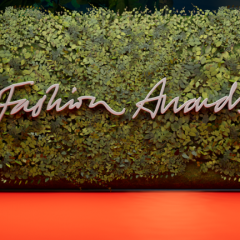 A new 'Metaverse Category' at the British Fashion Council's Annual Fashion Awards has seen its entire shortlist taken up by Roblox content creators.