The side event at COP26, ‘Reshaping Climate Narratives: Putting Justice at The Center of Climate Action’, brought a diverse group of people involved in climate action to share the injustices of the movement. That they wished to highlight and how they are working to tackle them.

The event was opened by Temilade Salami of EcoChampions who rightfully criticised the governments that “keep making 10 year plans as if we have that long to wait”, adding that climate change “is a now issue and we must treat it as one”. The event moderator then introduced the panel who, she said, had been chosen to represent a diverse group, as they wished to “not only have women or youth or Indigenous people separate but actually together, to connect, and inspire”.

First to speak was Ian from Decarbonise, who was the panel’s youngest member at 15 years old. He noted that within climate talks, “under 18 youth are not represented” and, he argued, are perhaps more marginalised than 18–35-year-olds, the age range that the UN currently defines as young people. He asked that more under 18s be given the chance to talk in spaces such as this to further climate justice.

Sheila Oparaocha of Energia International Network on Gender and Sustainable Energy spoke next and highlighted the injustices in the areas that her organisation covers, telling that “more than a billion people lack access to electricity […] and worse still, 22.6 billion people lack access to what we call clean cooking fuel”, and explaining that women and children were cooking over open fires and inhaling toxic fumes, which leads to close to 4 million premature deaths annually. She explained that Energia were working to tackle these issues, and to empower women in the regions that they work in, saying that they also make efforts to “train women to have a voice in spaces like this”.

A representative of Swedish organisation PUSH Sverige, Nadja Najjar, was the next panel member and, as the only speaker from the global north, said that she was “on the panel here to learn”. Following on from this she addressed the inequalities that representatives from the global south face at events like this, saying, “why do some have the mic, but others do not?” – a question that might seem a little out of touch to those who know why.

Chandelle O’Neil of Unite for Climate Action spoke directly about their struggle in even getting to COP26, sharing that their government “straight up doesn’t answer your emails” and that they had to find other means to make their way to the event, but said they’d been “having fun with getting around bureaucracy”. They also highlighted that governments try to separate us and convince us we’re different, arguing that decolonised and colonised are the same, and that “we can either do this together or we can die alone”.

Each panelist also gave a call to action. Ian from Decarbonise asked that governments “provide more institutions for people to raise their voices” and urged older people to “please vote for the right people”. Taurepang called for reforestation and the recognition of Indigenous women’s role in climate action, saying, “I play a key role on mother earth to ensure the lives of future generations”.

Oparacha called for “socially inclusive and just energy transitions” and Najjar asked that people such as herself from the global north, “take the time to question our own structures […] our privileges”. O’Neil succinctly said that people should “remember to be a good human being – it’s not that hard. Don’t take more than you need and help people in need”. 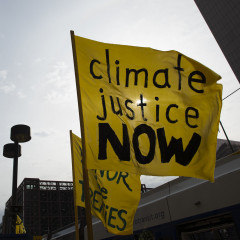