In what is apparently the only COP26 side event to cover the topic of climate education, the event ‘Climate Education and Youth Empowerment: The key to meeting our climate and environmental goals’ opened with a first panel chaired by Kathleen Rogers, president of Earth Day Network. Rogers started by calling for governments around the world to introduce climate literacy as a mandatory element of school curriculums.

Haldis Holst of Education International echoed this by stating that it “has to be mandated” and cannot only be a topic of activism, this is something governments must enforce in order to create a more sustainable future. She also expressed that she wants “all children to take part in climate education” as it is “through education” that we can “give the tools for the future”. Rogers once again reiterated that “the only thing standing in the way is governments” and that they had had a “difficult time convincing ministers to talk about this”.

Third member of the panel, Aysha Al Mudahka from the Qatar Foundation, also identified three key areas of learning involved in climate literacy: science and entrepreneurship, empowerment, and honesty and research. When asked what she thought were the building blocks of effective climate literacy, she said to “look at local challenges” and tailor education that tackles those first.

Holst also asked why students were being trained for “jobs that no longer exist” and instead called for students to be encouraged to “train for vocational jobs in the green sector”. She also noted that having a “holistic view of what education is prepares us for a green society”, advising that it is “not one subject or one topic”, but a topic that should “trickle in” to every aspect of society.

They all spoke of the importance of civic education also, that children and adults alike should be able to understand how their government works in order to be able to question how it works. Al Mudahka spoke on the need also for students to be able to effectively advocate for the environment and their own empowerment, saying “they need the right skills to be able to debate – to negotiate”.

Johnny Dabrowski spoke next from the audience, a member of Fridays for the Future, and the only young person actually given a chance to speak at this meeting on youth empowerment. He spoke directly, saying that governments “don’t get our perspective” and that they think of fighting climate change as “small steps” rather than one big overhaul.

He expressed that “what we can do as youth is advocate” and called for schools to be given “the tools to cope with climate anxiety”. He also took the governments to task on their unwillingness to introduce climate education, noting that they are “scared” of it, because it “is about purpose, about values […] they don’t want us to have values, they want us to change our values every four years.”

He then argued that ACE (Action for Climate Empowerment) was not working, and asked the panel “what has worked?” Holst answered that it was “not simple” but directed that attention should be paid mostly to building alliances, saying to “knock on the doors” of teachers, academics, government, etc. and build a network of people who will support your cause, saying that “numbers count”.

The second panel then took to the stage, led by Derek Mugisha of Biodiversity Hub International. He referred to young activists such as Dabrowski and said that they are “not future leaders but leaders of today”. He also returned to the subject of government failure in the inclusion and importance of climate education, stating that he had not seen a single country with a plan for climate education in their NDCs (Nationally determined contributions). “Our leaders do not have a plan”, he said.

Another member of the panel, Ismail Farja, coordinator of the Youth Climate Hub, spoke next and said that “young people have an expertise they can provide” and that there is a “need to invest in those aspects”. He argued that right now we are “targeting climate change as problems, not as opportunities” and advocated for climate related entrepreneurial opportunities for young people.

Kazi Zubair Hossain, a Bangladeshi Youth representative, expressed that he believed “non-formal environmental education needs to supplement formal environmental education”, explaining that young people will benefit from learning about something and then getting the chance to implement and understand it within their own communities. He said: “there is a dire need of activism and things to do outside the classroom”. Farja echoed this by saying that we need “concepts with concrete examples”.

Naomi Nyamweya from the Malala Foundation said that “lack of financing” is a key issue, saying that we need to “finance education systems for them to be resilient” in extreme climate situations, which will become more and more prevalent.

Mugisha reiterated the cost of climate change upon young people specifically saying, “each time the elders don’t act, the cost doubles”. Nyamweya agreed, adding that “children are not responsible for the climate crisis […] the burden to adapt should not be on them”. She expressed that the “biggest tool young people have is their activism” and that she wants young people to be able to learn “critical inquiry” in order to challenge their governments.

The speakers all spoke in an informed and empathetic manner and had strong points to share but in a meeting regarding youth empowerment, it would have been more fitting to have heard from more than just one young person (who hadn’t even been appointed as a panel member). It seems symptomatic of COP26 as a whole, a lot of theorising about what people need instead of simply asking them. 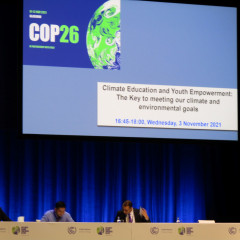