In the run up to Voice's latest coverage of the Edinburgh Festival Fringe, we have dozens of interviews with performers like comedian Zoe Lyons, who we'll be seeing up there.

Hi, I am Zoe Lyons, stand-up comic and my show, Little Misfit is very loosely themed on the idea of what it feels like not to belong to any groups. I think there comes a point in life when it is a great relief to realize that you have been and most likely will always be in the minority.

My Dad used to bring us to the Edinburgh Festival when I was in my early teens.It was great that he wanted me to experience the arts, however we often ended up going to sees shows that really didn't tickle my fancy. I remember sitting through a particularly dull performance of "Murder in the Cathedral". It was actually performed in a church and it was amateurish at best. I got a massive fit of the giggles at one point which made the pew we were sitting on rock back and to much to the disgust of my Dad.

Pure and simple, I am a show off, always have been. I get a big buzz out of making people laugh. So it was an innate drive to lark about for other people's pleasure that started me on the road.

I remember the first gig where I got paid. I couldn't believe someone was giving me money. It was a whole whopping £15 but I felt like Rockefeller. I think that was the point where I decided that I was on the right path. I was going to stick with this comedy thing.

So many good things have come my way as a result of doing this job. I have performed all over the world as well as having had some very fun television opportunities. I am my own boss essentially, unlike acting I am not waiting for someone to give me a job or cast me something. I am very much in charge of my own destiny.

It can be a very anti-social occupation. I work most weekends and sometimes I am away from home for days at a time. For the first ten years of doing stand-up I missed a lot of family and friend's gatherings and celebrations. More recently I have become better at taking time off and not panicking about it. Because you work for yourself there is a quilt attached to not working.

Sometimes the show just flies along and it just feels really easy and free. You know it is going well when you can come off piste a bit with the material and improvise around things. When it is going badly it is like your mind conspires against you and actually makes things worse, I will start to trip over words, forget stuff it is not a good place to be as your brain slowly abandons ship!

I was always such a big fan of Robin Williams. I think it would have been great fun to be able to work with him. I saw him once performing a small warm up gig in South London. To see such a big star in such a small venue was magic. I had a very brief chat with him and he was so lovely. Such a great talent gone far too soon.

Ever since those visits with my Dad I have been fascinated by the Fringe. It is a rite of passage as a new comic to come to Edinburgh and do your first hour as I did in 2007.

I suppose you get quite diverse audiences in Edinburgh. You never quite know what you are going to be walking out in front of. Over the course of 26 back to back shows you do get the odd show where audience are a bit of a challenge. Everybody has that "one" show during the run where it is all just a bit odd!

Pluck your eyebrows and think twice about going to University, you might be better getting a skill, plumbing or something. A skill will see you through those lean times.

Work hard at it and keep yourself in check. Be confident without being cocky, sure as eggs are eggs you will die as a comic on stage at some point and that is when a bit of humility comes into its own.

I am performing Little Misfit at the Gilded Balloon for the full run, in the Dining room at 7:00PM 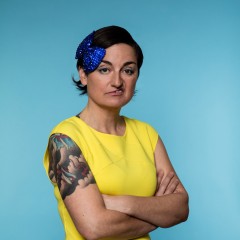 In the run up to Voice's latest coverage of the Edinburgh Festival Fringe, we have dozens of interviews with performers like comedian Zoe Lyons, who we'll be seeing up there.