Idriss: The reasons I'm giving Abandoman the award are for the level of talent and creativity they brought that night and the fact that, because it's all freestyle, every night is unique. The comedy is great and audience interaction makes you feel part of the story. There's a slight hint of satirical humour about the show where the story derives from a stereotype of wannabe rappers who dream of making it big which plays out very well for them and makes it enjoyable. The audience get to enjoy the show and join in the fun.

Jo: The Road to Huntsville is an extraordinary show full of intriguing facts, stories and a large amount of knowledge on a subject that many don't know much about. This show had me hooked from the start and I came out questioning what I thought I knew. It is unique and impactful and I still think about it now. I've never seen anything like it before and doubt I will see anything like it anytime soon. The honesty of the piece was refreshing and I was truly stunned by the end. Genuinely an incredible and inspiring show that taught me a lot and wowed me equally.

Bhav: The show I described as the best show I'd ever seen at the Fringe deserves this award. Her talent for ventriloquism is one that is so unique and she has taken it and shaped into a spectacular experience for the audience. Constant laughs and an electric atmosphere, not to mention regular standing ovations from a sold-out Pleasance Grand means that everyone needs to give In Your Face a go. Conti has blown up in recent years and it's telling that no ventriloquist has come along and tried to give her a run for her money. None could come close to the imagination and ingenuity of this stellar improvised ventriloquism routine.

Luke: Netherlands performer, Sven Ratzke brought the life, soul and spirit of the great David Bowie to life in this fantastic tribute performance, and I will never forget the beauty and passion that Ratzke crafted with his words. If there's a show that deserves Voice's Pick of the Edinburgh Fringe more than any other, it's this one right here.

Tom: It was a show unlike any I'd really experienced before, with brilliant nerdy references, an almost cult-like nerd gathering, and John Robertson stomping among the audience dressed up in goth boots and armour, harassing them into playing a real life text adventure game that is so horribly stacked against you you'll feel like you're legitimately back in the 80s. The jokes are as dark as the room you find yourself in, and the Democracy round was simply brilliant.

Idriss: Absolutely outrageous, and worth seeing, if you want a great act and lots of fun for your evening at the Fringe. You won't be disappointed. There are a lot of elements that start off random but lead up to something funnier than expected. Compared to a normal stand up, this show is far beyond funny with things I didn't think I would find funny at all but managed to make me laugh. There are way too many great moments to list them all, a definite must see.

Elena: Angus, as an unstoppable storyteller, keeps you engaged with a full hour of hilarious lines. He speaks in defence of creative liars and social awkwardness in a mix of fast-paced jokes. He draws from his childhood, his experience as theatre technician and ninja friends. His original perspective on life and how we construct our personality is a fresh and surprising addition to the Fringe. Mix his originality with funny impersonations, stir well with ingenious lines. Finally, add a great performance, as warm as he is brilliant, and voilà: this is The Vanity Project!

Yet physical theatre group, Sleeping Trees, does all of this without the use of props or set - simply wearing three Star Trek inspired t-shirts to set the scene, and incredible acting to tell a complex space adventure story. Obviously by nature of the performance, some scenes become a creative parody of the genre using, manipulating and satirising recognisable scenes from Star Wars to Star Trek and everything outside and in between. Sci-Fi? was a hilarious, engaging and wonderfully imaginative piece of theatre from an incredibly talented cast, and I thoroughly recommend catching it at the Fringe!

Emily: Ben Hanlin was boisterous, funny and hugely likeable. His tricks, though simple to begin with, headed towards the utterly mind-boggling nearing the end of the show, and the energy never let up. He was able to keep multiple threads running at once, juggling magic tricks, jokes with the crowds and long-running ta-dah moments throughout the performance. His cheeky boyishness was a hit with the crowd, and even his most eye-roll-worthy quips got a chuckle. Lively and engaging throughout. For once I actually wanted to be picked from the crowd and dragged up on stage.

Luke: This lovely lady combined 99 impressions and music into one extravaganza show, detailing the importance of overcoming grief and reminding yourself who you truly are. From the moment I first sat down, Robinson impressed us all with her ability to sing in a variety of accents of famous celebrities from Alanis Morrisette to Janis Joplin. It was inspiring. It was incredible. It was impressive!

(Something for the Weekend)

Bhav: An entirely improvised musical and it was improvised as well as you can imagine. Perfectly executed and relentlessly entertaining. The singing was incredible, the physical and lyrical improvisations were incredible, the music was incredible - there is no end to how impressive every aspect of the show is. It's all low tech: improvised set and props so it's not a musical with all the pomp of a conventional one but certainly with all of the impact. You'll leave wishing you were as intelligent and quick-witted as this small, Olivier award-winning company. Don't pass this off as a bit too niche, even if you're not into musicals.

Elena: This talented Scottish singer has brought to the stage stage an outstanding show. She looks back at past traumas and relationships with her parents, relatives, friends and lovers. Her story is about identity and passion for music. It is about the union and connection between the two. It is about the fact that this special mixture makes her who she is. Innumerable lessons are carried and generously shared in her story. I think I was very lucky to get the chance to see it and hope that many morepeople will have the same opportunity. Such a wonderful and touching show!

Only the one this year.

The lightning fast, hyperactive comedian packs out Heroes @ The Hive regularly leading to hoards of people being turned away. Buy a ticket and get there early. Whatever you do, don't miss him.

Congratulations to all the Picks of the Fringe and the best of luck in the last week of the festival!

For all our reviews and interviews from this year's Fringe, visit the Edinburgh Fringe 2016 Voicebox. 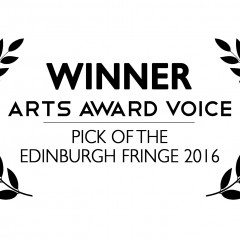 Voice's Pick of the Edinburgh Fringe 2016