Welsh independence has become a focal talking point in Welsh politics in the last few years. The prospect of an independent Wales is looking more likely than ever before, with support gradually increasing.

In March 2021 an ITV poll recorded that 39% of Welsh people would vote ‘yes’ in an independence referendum, a rise from 32% in a YouGov poll in August 2020. The poll also found that 53% of Welsh voters now felt that Wales has “different social attitudes to the UK”.

There has also been growth in support for Wales gaining further devolved powers. A 2020 YouGov poll conducted on behalf of YesCymru, the campaign for Welsh independence, found that 59% of the people surveyed supported “devo-max” – devolution that stops just short of independence. This increased to 82% when looking specifically at 18–24-year-olds.  In October 2021, Welsh Labour announced a commission that would consider Wales’ relationship with the rest of the UK – with independence and devo-max being considered as options.

As support for a more separate Wales grows amongst the public, political parties in Wales are having to discuss the matter and begin to make their stance on the subject clear.

A political party that has firmly taken a side on the matter is left-wing Welsh nationalist party, Plaid Cymru, which openly advocates for Welsh independence as one of its key goals. The party’s spokesperson for independence Rhys ab Owen explained to Voice why Plaid believe independence is necessary for Wales.

“I think that Plaid Cymru are of the view, and so am I as being a Plaid Cymru elected politician, that Wales can do things better if it has the power to do so,” he said.

Some people have questioned whether Wales is capable of existing as an independent nation. In response, ab Owen said: “That’s an old, tired argument that people have made across the decades against countries becoming independent. That was said about both Ireland and Malta when they sought independence. For example, Wales’s economy was much larger than the Irish economy back in the 1950s, now the Irish economy is much larger than the Welsh economy. It just shows that when you have the powers in your own hands that you can make it work.”

He continued: “I think a strong argument for independence is that there isn’t a single example of a country that gained independence from the British empire, from Britain, that has asked to go back. It is the reality, it is the norm of the world, that countries are independent. Empires and conquering other countries are a thing of the past, of the previous century.”

When questioned on whether Wales has the resources to support itself, he argued that “Wales powered the industrial revolution, we will also be able to power the green revolution. If you think about the resources Wales has or had in the industrial revolution, I think we also have these fantastic resources, [...] green resources that other countries would be very jealous of. We have such potential with tidal, with wind energy, with water, things that aren’t being done at the moment.”

He expressed that he had witnessed a growth in support for independence and that the pandemic in some ways seemed to have accelerated that growth. “I think that the major factor for that was the Covid pandemic, or to be clearer, was [the] Westminster government’s response to the Covid pandemic [...] I think it has shown a lot of people living in Wales that [...] we don’t have to follow Westminster, and when we do follow Westminster, as we did at the beginning of the pandemic, things aren’t better at all.”

He identified other factors in Westminster that may have pushed people towards independence. “I think Boris Johnson has been a fantastic recruiting agent for Welsh independence. Other factors also play into it, Brexit, the complete disregard that the Westminster government is showing the devolved nations and devolved settlements at the moment, and the arrogance and the sleaze that we have in Westminster.”

He mentioned a growth in youth involvement in the movement, saying that “if you look at support for independence it is much higher with the younger generation – the generation that doesn’t tend to vote for the Conservative party but have been lumbered with a Conservative government for most of their lives.

“I think that [...] probably the disappointment with Brexit has driven a lot of young people to support independence. There’s also the desire for a better country, and I think that’s a huge thing for young people thinking ‘well, actually, this isn’t good enough, Britain as it is isn’t good enough and we can do things better in Wales’. I think the youth movement has played a significant role and will continue to play a significant role.”

However, despite a growth in support for independence and the hopeful outlook of Plaid Cymru, some people in Wales are firmly against the idea of independence. The Welsh Conservatives are of this opinion, and when asked for a comment on the issue, shared this statement from leader Andrew RT Davies.

“Independence for Wales is a divisive, damaging, and unwanted proposition that is not discussed beyond the usual political bubble.

“The United Kingdom is [the] greatest success story of the modern world and only those with an interest in its destruction say otherwise.

“Welsh independence would achieve nothing but the end of Britain, turning families and friends into expats and foreigners in our own land.

“Instead of narrow nationalism, the great people of Wales are more interested in demanding better public services after a quarter of a century of failed Labour rule in Cardiff Bay.

“Before the pandemic, Wales had the weakest NHS, school system, and economy in the UK – all due to successive devolved Labour administrations – propped up by their helpers in the Welsh nationalists.

“The Welsh people desire and deserve better than unnecessary divisive debates over the constitution and it’s time for politicians to focus on the issues that matter most to people in Wales, which most certainly isn’t independence.”

The Welsh Labour party has been in power in the Senedd, or Welsh parliament, since Welsh devolution in 1999, and the party, being part of the UK-wide Labour party, is officially (for the most part) pro-union. However, support for independence has grown amongst Labour voters in Wales and even amongst Labour members.

A 2021 survey by Savanta ComRes found that in 2019, excluding those who were undecided, the majority (42%) of Labour voters in Wales would have voted ‘yes’ in answer to the question: “should Wales be an independent country?”, whilst 38% would have voted ‘no’.

Labour members have also been known to support independence, with party members setting up the campaign group Labour for an Independent Wales in 2017, a group for people who “believe the best way to achieve a democratic socialist Wales is through independence”. In 2019 the Labour-run town council of Blaenavon voted to support independence, joining a number of other regional councils that have backed the idea.

In the Senedd elections in May 2021, three of the Labour candidates running were openly in support of Welsh independence, including Dylan Lewis-Rowlands who stood for Labour in Ceredigion. Speaking to Novara Media, he argued that “Wales is creating a distinct identity and has a distinct body-politic,” adding that “We are perhaps 30 years behind Scotland, but Wales is becoming politically different. And that’s not because of Plaid Cymru – it’s because of Welsh Labour”.

In June 2021 a study found that support for Welsh independence was split between Labour and Plaid voters, with 45.8% of prospective ‘yes’ voters supporting Plaid, and 41.7% supporting Labour. Dr Jac Larner of Cardiff University argued that “support for Welsh independence is at record levels thanks to Welsh Labour voters, rather than because of Plaid Cymru converting new voters to their cause,” adding that “this is linked to those Labour voters feeling more politically Welsh, trusting the Welsh Government ahead of Westminster, and supporting Mark Drakeford’s leadership.”

With Labour’s success in Wales and the continued focus on independence, some are asking Labour to take a stance on the issue. In a statement on YesCymru’s website, its chair at the time, Sion Jobbins, said, “Of the two major unionist parties in Wales we only know where the Tories stand - they want to roll back devolution. Labour now needs to step up and make its constitutional position clear - waiting and hoping for a Labour win in Westminster in 2024 is not an option especially as the Tories are planning to get rid of 20% of Welsh seats and Scotland will probably have left Westminster by then.” 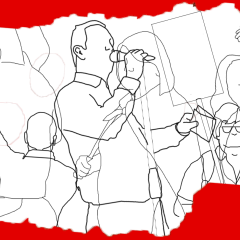