We all know the stereotype. The cardboard mat, the seemingly dirty sleeping bag, the appearance of matted hair and assumption of an alcohol-infused body odour. We walk past with a quickened pace, determined not to meet their gaze, that feeling of guilty helplessness washing over us. “After all”, we tell ourselves, “I can’t help everyone”. So is it the sheer number of people on the streets which immunises us to their suffering, or does our decision to ignore them stem from a buried flash of malice; the disgusting internalised notion that it’s their own fault, that they must have done something wrong to end up like this?

Last October I volunteered at a homeless drive in central London where I handed out donations to homeless people living on the streets. For the first time in my life, I stopped, I listened, and I attempted to help. An overwhelming rush of relief is my most potent memory of that cold Saturday night. It was a relief to alleviate years’ worth of encounters I regretted, all those times I did nothing to help. It was as if those few hours could make up for a lifetime of cold-heartedness. It was a relief to be able to engage, to show that I cared, to be the philanthropist we wish we always had the capacity to be. And it was a relief to not feel the shame of walking past those in need as if I was blind their misery. But that begs an important question. Who am I to claim all these emotions for myself? Is this in any way aligned to what the homeless people themselves feel? And what does one night of benevolence truly achieve in the face of a lifetime of ambivalence?

I started that evening feeling apprehensive but determined. I had spent the day proudly telling my friends of my plans that evening, and was excited to finally be able to “make a difference”. It hadn’t occurred to me at that point that my efforts were not to be as appreciated as I hoped them to be.

The homeless drive was organised by a close friend of mine in association with the Youth Project, a charity organisation which targets teenagers as its volunteers. My friends and I gathered at the University College London, in a lecture theatre swamped with donated supplies. There were cereal bars, gloves, hats, hot food, tissues, water bottles, socks, chocolates, energy supplements and a battalion of plastic bags to pack them all in. Using a production line, we collected 100 bags’ worth of supplies between us. Then, we split into groups of 6 or 7, each holding several bags, and set out.

And then the easy part was over.

So out we went onto the damp and darkened streets of central London, with no adults, no scripts, and no real idea of what to do. Our only instructions were to hand out the bags of supplies to any homeless people we passed, and to stop to talk to them about their experiences. It wasn’t an empty gesture, but the ultimate aim of the night was not to give these people physical help, but more to show them that we cared. We knew that our packages would help, but we weren’t expecting them to change these people’s lives.

The organisers of the homeless drive explained to us that it was just as important to engage with these people as it was to offer them the supplies.

For a while, we could almost forget why we were there, almost imagine we were just having a night out on the town. That is, until we spotted the first gentleman sitting on the pavement. He was an elderly man of a cheery disposition, sitting cross-legged under a blanket against a cold concrete building. Not exactly threatening. But that’s when I realised that there was more of a barrier between us than I thought; a niggling concern making me hesitate. How do you approach a complete stranger to offer them aid? What opening words do you use to speak to a gentleman whose world is so very different to your own? I felt embarrassed and awkward, and altogether useless.

The one bag of supplies suddenly seemed pathetic. I realised that I was expecting a huge amount of gratitude for what was, in reality, a very small action. I hadn’t even bought the supplies myself...

My friend went up to him first, and then the rest of us joined. It was a strange experience. We were breaking that social barrier of convention that would have kept me, on a hundred different occasions, from speaking to him. Had I been worried he might have been dangerous, or did I simply have nothing to say, nothing to give, nothing I felt I could do beforehand? Whatever it was, it had disappeared the second I made eye contact with this gentleman. He was courteous, and grateful, but didn’t divulge much about his life. We left him after a minute or two, exchanging mutual goodnight wishes and polite salutations. And then I felt invincible. We had done what I personally had previously considered to be inconceivable, and I was overwhelmed by that rush of relief and sense of absolution I mentioned earlier.

What selfish emotions to have...

We repeated this encounter several times over. Some of the homeless people were friendly, some were too intoxicated to notice us, others seemed slightly irritable or perhaps even dangerous. In short, their reactions were simply normal - no different from those we would have found from any other group of people. The same stories pervaded throughout the night: drugs, prison, and then the crippling return to a world that doesn’t want to hire you, rent to you, or help you in any way. A benefit system with as many holes as the cracks in the pavement.

And then there were the details which touched a deeper nerve. The father who hid his bottle of vodka from us because he didn’t want to be a bad influence. The woman who was led off by a man only seconds before we reached her. The teenager who gave his dog a drink of water before quenching his own thirst. It is the juxtaposing details which still bother me months later. The fact that a young mother had an iPhone but no hat, or that a disabled lady had a motorised wheelchair but was begging on the streets. These little details emphasised that they were people and not stereotypes. They were people with lives as complex as anyone else’s and hopes and dreams like no one else’s.

We gave out our last bag of supplies at 11.15pm, and trudged back to the humid tube station. I know for a fact that the people I met had a far greater impact on me than I could have ever had on them, and that makes me wonder who the homeless drive was really for. Had I been expecting some sort of martyrdom for a few hours of volunteering?

Sometimes I wonder if we only do “charitable acts” to make us feel good about ourselves. Philosopher Immanuel Kant questioned whether there is such a thing as a truly unselfish act. Can you ever help another person without gaining something yourself, or without having the motivation of gaining something yourself? I certainly encourage other young people to volunteer their time and energy to help others at some point, but perhaps examine your reasons for doing so thoroughly beforehand.

I hope I actually did do some good that night, for I know it wasn’t intended as an egotistical trip of self-gratification. I will never know how much those supplies were actually used, or how glad the people I spoke to actually were for an attentive ear. I still don’t stop every time I see a homeless person on the streets of London. But now at least I know I can. And that makes, in a small, if personal way, a very big difference. 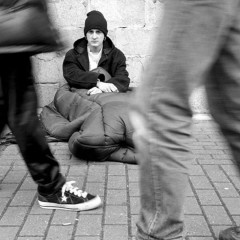 Stop Don’t Stare – My Experience of a Homeless Drive