It's not me, it's you. I want more from this relationship, I want to start seeing women, and diversity, and I think I should be treated with respect.

I think it is about time we sit down and have a heart to heart. Things have changed in recent years, we as gamers have changed, and it is time you change with us.

Your industry has already collapsed once, under the shambolic, money-grabbing disaster that was E.T., and I would have thought you'd have learnt your lesson. Instead, here we are in 2015, and still we as consumers are having to put up with your crap.

When did it become acceptable to release games that are unfinished and broken? Assassin's Creed Unity, Master Chief Collection, Pay Day 2, Sim City. All are examples of the contempt you have for us as consumers, and opt for pushing a game out in time to make money, rather than hold it back and perfect it. We should not have to download huge, multiple gigabyte updates the moment we put a disc into the console.

This being said, even delaying the game doesn't seem to save us from broken games any more. Arkham Knight, a game I personally absolutely adored, was delayed for 8 months, and when it came out it was was appalling unoptimised for PC that sales were actually pulled! It is only very recently, as in, a few days, that patches were released that made it playable. So a game that was delayed for 8 months, eventually coming out in June of this year, took a further 4 months to be playable on PC. That is disgusting.

It is interesting also, how since we have a new generation of consoles, it has suddenly become acceptable to re-release old games with slightly improved graphics, and sell it for full price. The udders on your cash cows must be completely raw, the way you constantly pump them. Why, rather than invest in new IP, do you feel it appropriate to make quick cash by buffing up the graphics of an old game, without going through the process of optimising it to at least run at 60fps. I'm looking at you, Dishonoured!

While I have access to this soapbox, I want to talk about yearly franchises. They are bad. They are boring. They need to stop. CoD, Battlefield, Assassin's Creed. You are pumping these out year after year, with minimal changes, more than a few bugs, and no real advancement on the franchise. CoD is especially guilty of this. Advanced Warfare was boring, convoluted, and railroad like in its linear, predictable storytelling. We don't even talk about Ghosts. I enjoy shooters, do not get me wrong, but they are getting stale, and expecting people to pay again and again for slight changes to core gaming mechanics is not going to fly forever.

When are we going to get more female protagonists? As a male, I guess I should be grateful for so many opportunities to project myself onto these huge, butch, masculine bulks of testosterone and one liners, but, and maybe it's just me, but it's getting bloody boring. The same cardboard cutout men, running around saving damsels in distress and revelling in mindless destruction just isn't cutting it any more. It feels weird to call Tomb Raider an exciting game just because there is at least some variation to the genre, but it's true. I am looking forward to Fallout 4, where you can select either gender, and have huge customisation options. It will be great. Gaming should be about giving users a choice, and we haven't had choice for a long time.

Don't even get me started on micro-transactions, in-app purchasing and the dreaded season pass.. Something that was annoying, but arguably necessary on mobile devices should not be jumping across to a platform where games cost upwards of £50 each. It is long overdue that mobile gaming gives up on the pay to win, or even worse, pay to to continue to play tactics that are destroying the mobile gaming eco-system. We do not need console and PC games to start jumping on the bandwagon.

Cosmetic items, such as hats, or other skins, fine. If you really want to make those, and offer them as optional purchases, that's fine. Do not lock away whole sections of the game, and only offer it to those who blindly purchase your season pass. More and more frequently, games are announcing season passes before they have even released. Consumers are now expected to pay an additional charge to access parts of the game that were arbitrarily held back from release. Gone are the days where DLC is released to improve the gaming experience, it is just another way to extract cash from gamer's wallets.

While on the subject, gamers, do not think you have escaped my disdain in recent years.

Game developers and especially publishers will always go where they think they will make the most money. We have given them carte blanche over the years to continue these practices by repeatedly getting caught up under the wheels of the hype train, buying these churned out annual releases, and pre-ordering games which are likely to be broken for the chance to own some superficial in-game accessory.

There is also the toxic undercurrent within our community that we need to combat. Those that lurk in sub-forums and incite sexism, homophobia, and intolerance of anything that isn't part of their white middle class blinkered life view. It is amazing to see how, even now, both sides of the Gamergate argument are attacking each other. I tend to not get involved in Gamergate discussions, in the interest of being balanced, but once again I was recently reminded of the inequality in society, and how badly women can get treated by males.

This needs to stop. Feel free to hold up the expectation of ethics in game journalism. I am a journalist, I believe there should be an ethical standard by which we should operate. In fact, in this country at least, there is an ethics code. But, ethics or not, there is nothing ethical about doxxing anybody who dares speak up for females in the industry. Women make up over half the world's population, there are more female gamers than male, and every person that is part of our community is one more voice who can speak out against anti-consumer practices that game developers may be tempted to enforce.

I think gaming is a fantastic medium of creativity and storytelling. For example, The Last of Us have really demonstrated how games can be a cinematic experience, and things like Minecraft have pushed the boundaries of what is possible educationally. I have written numerous articles on how they count as art. Art is about inclusivity, and portraying a message. Let's send a strong message to publishers that we no longer want to be treated so poorly and with such contempt. Let's also send a strong message to the neckbeard, vitriolic trolls that they are no longer welcome in our community. 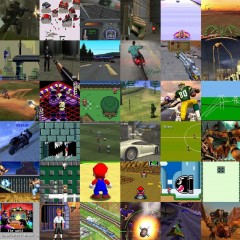 An open letter to the gaming industry

It's not me, it's you. I want more from this relationship, I want to start seeing women, and diversity, and I think I should be treated with respect.