It’s difficult for we Brits to really click with the ceremonies that happen early on in awards season. Sunday night saw the Golden Globes ceremony take place and, as with other early ceremonies, we don’t always connect with the competition because we’ve not seen so many of the films and a lot of the television will never be broadcast here. The big winners, Three Billboards Outside Ebbing, Missouri and The Shape of Water won’t be released here until Friday and Valentine’s Day, respectively.

As a result, any news or controversy that might overshadow the wins in any given year will do so more intensely for British viewers. Overnight, Oprah Winfrey’s acceptance speech for the Cecil B. de Mille Lifetime Achievement Award went viral and very much captured the essence of the night over and above the actual awards.

Similarly, very well publicised was the move by attendees to don black attire at the event. This was a public demonstration of protest against the mistreatment of women in the entertainment industry and beyond. Badges of “Time’s Up” were also worn, the new prevailing slogan showing a defiant front, declaring that previous, ‘traditional’ behaviour will no longer be the norm.

Oprah Winfrey herself exemplifies this and then some. Her history with sexual abuse is well known. In her speech she eloquently wove Time’s Up and #MeToo into the diversity proudly shown by the Hollywood Foreign Press Association in its roster of nominees and winners this year. Oprah gleamed as she told an anecdote about her seeing Sidney Poitier becoming the first Black lead acting Oscar winner when she was young and telling of the hope she wishes to give to young people seeing her become the first Black female to win the Cecil B. de Mille.

Elsewhere, Aziz Ansari made history for the second year running by becoming the first actor of South Asian descent to win a comedy acting Globe for Master of None after winning the directing award last year. Mexico's Guillermo del Toro (Pan’s Labyrinth) won his first Globe for directing The Shape of Water.

Other big winners were Three Billboards, Lady Bird, The Shape of Water, I, Tonya, and Battle of the Sexes and there were further nominations for Molly’s Game, All the Money in the World, and The Post, which all are ferociously female-led films.

Sterling K. Brown picked up his first Globe off his first Lead Actor nomination for This Is Us. Outside chancer, the first series of The Marvellous Mrs. Maisel took both the awards for which it was nominated - Best Comedy Series and Best Comedy Actress for Rachel Brosnahan, surprising most everyone. This stuck even further to the female empowerment theme of the night being the story of a 1950’s housewife who decides to become a comedian.

The lack of attention shown to Get Out is down to its categorisation as a comedy/musical rather than a drama. The move is hard to forgive and testament to the Globes’ historic and unchanged illogical categorisations.

Beside that, it was an emotional night, with tributes being paid to mistreated women, ethnic minorities, the LGBTQ+ community and then some. 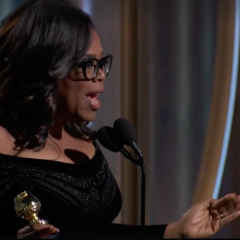 The Golden Globes take aim at Hollywood's mistreatment of women