Voice MagBlogsGE17: Why do we hate…

It's Polling Day today, but, I'm sorry to say, the politicking won't have subsided by tomorrow.

Do most people not enjoy talking politics because they lack the conviction?

You run the risk of getting called a stick in the mud or getting a reaction of "ugh, not more politics" if you broach the subject. Surrounding this particular election, a year on from a national referendum, which was one year after the last General Election, 'voter fatigue' is an issue.

We've had a couple of years of looking at what's wrong with the state of things, not to mention what would be wrong with the alternatives, and deciding which way to vote based on these morose observations. Of course, it's important to discuss the election, be you a politically engaged pensioner or a youth trying to protect your carefree image. This is mostly the case if the discussion is with undecided voters who, frankly, need to make a decision.

If you have made a decision, you have a selfish opportunity to get those you're speaking with around to your way to voting. You must, however, entertain the idea that they fundamentally don't agree with your party's policies. But, at least you're getting them to vote, which is of a greater benefit than relegating them to be part of that grey slice of the pie chart that represents non-voters.

This could obviously lead to…

Most people are highly passionate about their political opinions and, more often than necessary, discussions can get angry and personal. On both sides of the political spectrum the insults 'loony, lefty, luvvie, communist' and 'far-right, elitist robot' are bandied around.

For me, the most important thing about talking about politics is to do so while being measured, being (or getting) informed, being mature, not being presumptuous, not attacking individuals, and not being hypocritical.

If someone is going to attack you, you have the options of either conceding to the fact that someone like that isn't going to change their opinion, or standing up to aggression with reasoned and cool rebuttals. It's easy to talk about politics without shouting and making it personal. Even if you can't change a person's vote, you can at least get them to talk about it reasonably, and reason is the order of the day.

Be open minded, too. If someone says something about your party of choice that you don't or wouldn't agree with, have the patience to look it up – it may well be false. At the same time, it may well be true and if it makes you question your own decision, it may leave you feeling like you've got egg on your face. However, no party is perfect, don't create a bubble around yourself by convincing yourself that they are. Weigh up the pros and the cons. If you're on the other side and manage to cause someone to rethink their allegiance, take it as a quiet victory rather than flinging the 'LOL 1-0s' at them.

Now, the General Election has been a not-so-long time coming so to have doubts so close to the event can lead to…

Simply put, are you lily-livered if you change your mind in the last week? Do you have a weak constitution if you're a lifelong voter of one party but feel the need to defect? No matter what advice you hear about the acceptance of fluid political opinions, can you really be doing with the hassle of not going with your easy option? Even more superficially, are you the only one risking voting differently to the rest of your family/friends/ward?

Not to question your own politics is stupidity. People often consider politics to be a communal activity and, while I think it is important to base your decisions on how they will affect other people, too, it is fundamentally a personal decision to make. As such, it is important to be assured in your decision. If you're on the fence, do the research well enough and do not be scared of changing your mind.

Ethics versus practicality causes a great deal of uncertainty. This is certainly the case this time around the new approach Labour has taken on public services and the Conservative Prime Minister taking a different stance on leaving the EU than she has campaigned for. This is, of course, a valid and robust concern with the broad arguments being: idealist policies cannot be paid for and risk the strength of the economy; and when did we get to the point, as a society, that we care more about finances than ethically sound policies?

These considerations are far from black and white and there's enormous disenfranchisement among people who do not feel adequately represented by any party. Is it better not to vote than to vote, so to speak, for the lesser of two evils? Absolutely not. It's important to hammer out a decision evenly enough that you feel confident and assured in your decision regardless of how it compares to others'.

It's a risky business filled with jargon, fake news, and hot temperaments. Democracy is all about representation, so let's engage people in it – it's worth making every effort to get people to the polling stations. 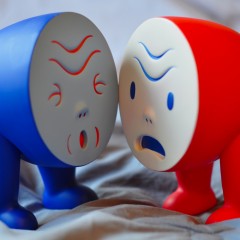 GE17: Why do we hate talking about politics?