Are you bored of films repeating themselves? It's not just the endless remakes that are giving you a sense of filmic deja-vu, many films follow tried and tested formulas.

Sometimes it feels as though Hollywood thinks we won't know when they repeat a movie we've already seen. Do they think that just because there are different characters with different names, and it's set in a different place that we can't spot the tell tale signs of copying? This most certainly seems to be the case in The Fast and the Furious, which is basically just Point Break with cars. Want to know why?

1. Both films are set in LA. The film starts off with a robbery. In Point Break, our characters are robbing a bank, with The Fast and the Furious it's a truck full of DVD players.

2. Our main character is an undercover FBI Agent who takes interest in the same activities is the bad guy he's chasing.

3. Said main character goes to a diner at the beach, where, surprise surprise, they stumble upon the key love interest.

4. The love interest is closely related to the bad guy, but the bad guy is cool and has a mi casa es su casa sort of policy with the women in his life.

5. Later on, the main character joins the bad guy's social nighttime activity and decides to have a race. In Point Break Johnny gains the respect of the crew, while in The Fast and the Furious, Bryan get booed and laughed at.

6. There's a moment where the main guy realises who the bad guy really is, but decides to let him escape.

7. Later on the main guy joins in the last heist of the movie to try and stop them, and for some reason the professional criminals turn into rookies.

8. There's a long action sequence where the two characters play cat and mouse and people get really hurt.

9. At the final showdown the main character finally gets the upper hand, but decides to let the bad guy get away again before back up arrives, because: "for one last ride".

10. Both blonde actors died in real life, much to the upset of their dedicated fans.

Both movies are great and really memorable. Regardless of their similarities I think they're both really good standalone movies that deserve the recognition. We have lost great stars from both films. As long as people keep pressing play, they will never be forgotten.

Let me know which two films you think are achingly similar in the comments below and I might give them the Deja-View treatment! 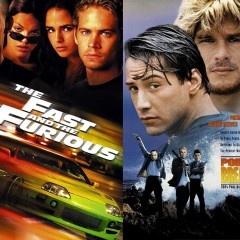 Deja-view: Point Break and The Fast and the Furious

Are you bored of films repeating themselves? It's not just the endless remakes that are giving you a sense of filmic deja-vu, many films follow tried and tested formulas.