1. Both films start out in the same Star Wars tradition, with the title, the episode and intro for people to read before the film starts. Then, of course, the classic pan to a star ship.

2. Pretty soon we see a small rebel base that is invaded by the Republic/First Order, led by a masked badass wearing all black, who prefers to choke people with The Force rather than his hands.

3. Top secret information is given to a cute little droid by one of the main characters. BB-8 really does win the cute prize here.

4. Said characters are captured (not before the cute droid makes a get away) after witnessing a fellow rebellion get killed by a badass Sith lord, and are taken into the star ship to be tortured.

5. Droid ends up on in desert and finds our lead hero/heroine.

6. The lead character is a young, ambitious teen who dreams of one day leaving the planet to join the rebels.

7. This dreamy lead meets another character, who knows where the rebels are. They leave the sand planet together, of course, on The Millennium Falcon.

8. There's an iconic scene where the Millennium Falcon fights a group of tie fighters where our characters use the canons to shoot them and get away.

9. There's a scene where our lead is held up by a Stormtrooper and uses The Force mind technique to get free.

10. Both movies feature similar characters that you'd need to make any Star Wars movie. There's the badass honky pilot, the hero who's secretly strong with The Force, the bad guy with a mask who only wears black, the evil emperor, the old pensioner who's also the hero's mentor, a droid containing top secret information, furry aliens and a planet-sized, planet-destroying weapon. They also feature iconic characters, like Han Solo, Princess Leia, Chewbacca (Chewy), Luke Skywalker, R2-D2, C-3PO and even general Ackbar.

11. There's a scene where our characters end up in a shifty cantina with an alien band playing music. In my opinion the band from the original is better.

12. There's a scene where the awesome pilot does a deus ex machina and flies in to help our main characters.

13. There's a scene where our lead is given a lightsaber by the wise character that's been passed down by people who've lost their right hands using it.

14. There's a scene where the bad guys are flexing and they use the gargantuan weapon to destroy a planet or few.

15. There's a scene where the mentor figure confronts the Sith Lord guy, and all the main characters have front row seats. The hero/heroine screams NO! After Sith Lord guy kills the old mentor with his lightsabre.

16. Our characters finally get to the rebel base where they line up a plan to blow up another the Death Star. The plan is to infiltrate the base, deactivate the shield generator to make an attack.

17. The badass pilot leads the attack on the Death Star. They fly through into the trenches and manage to shoot through a small hole to hit the centre with 100% accuracy, making it super effective and causing critical damage. #gamereference

18. There's a part where both our hero and villain confront each other on the Death Star. Just before the final boss KO's our hero, they remember to 'Use The Force' to win the battle.

19. The heroes fly back to celebrate their victory and are praised by Princess Leia.

20. In the final scene our lead character walks their way up to an important figure. Luke Skywalker is given a item by a young woman as they stare silently. The iconic soundtrack by John William plays before the crossfade circle into the credits.

Believe it or not, there was rather a lot more that could have gone into this! After seeing The Force Awakens I knew there were traits similar to the first original Star Wars, and of course homage to the Empire Strikes Back and Return of the Jedi, but I feel that J.J. Abrams did a good job directing this and I'm excited to see Rogue One. 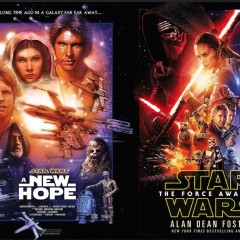