Voice MagBlogsCover to cover: a ta…

Regardless of your feelings adaptations of literary works are huge and fairly unavoidable, so occasionally we just have to embrace this. I'm not going to lie either, sometimes the book is just a bit too long!

This year is a big one for adaptations, with the BBC having recently finished two exciting new series, Dickensian and War and Peace, and have the upcoming adaptation of John Le Carre's The Night Manager too, while ITV looked further back in time with a reinvention of Beowulf.

Looking towards our cinema screens this year is exciting, with the second live action Alice and Wonderland, as well as an exciting cast for The Jungle Book, and a new version of The BFG. We will also see the third instalment from the Divergent series, romance Me Before You and the highly anticipated The Girl on the Train, amongst many others. If you are sticking to your guns about reading the book before the movie comes out then you will have a lot to read this year!

So if we have to make the book into a movie or a TV series, what makes for a good version? Does it have to stick to the story line, or can the director have some poetic license? I am the first to notice errors or omissions - Hermione's dress was meant to be periwinkle in The Goblet of Fire, not pink - but as books are usually longer than their visual counterparts, we have to make some concessions. Some of my favourite adaptations have serious alterations - I highly doubt a band like the Black Eyed Peas would have been playing at Gatsby's party in the 1920's but I don't care because the music was amazing!

Sometimes these alterations can capture the feel of the work better than sticking to the core material would. Amazon's recent hit The Man in the High Castle has practically no relation to the original book aside from the setting and characters. The premise was completely altered from being about a radical book telling of an alternative reality to films, but this is so clever because the story is now being told through TV (the whole story is an alternative reality too, think Inception level confusing, but just as brilliant!). And let's not forget what happens when you completely transport the story to another setting: The Lion King is actually based on Hamlet, but it doesn't ruin either one at all!

Even more controversially Dickensian drew on multiple Dickens' novels in order to offer the back-story to his most iconic characters. We get to see how the ghastly Miss Havisham ended up jilted, what happened to Scrooge's former partner and the prequels to many others. There is no material for much of this in Dickens' work, it was completely fabricated, but clearly very well researched and thought through because for me, it worked brilliantly.

If you are keen on checking out some more adaptations here are my some of favourites (in no particular order as I can't decide which is best):

One of my favourite films ever, the cast is fantastic and it truly captures Austen's novel. It is also a brilliant performance from the late Alan Rickman, so definitely one to watch.

I was skeptical at first then slowly warmed to the idea, until I was so swept along by the hype of this highly anticipated blockbuster that I thought I was sure to be disappointed...but no! Baz Lurman's lavish take on this brilliant novel was controversial but I think it was fantastic. The casting, the attention to detail, the music, it all worked so perfectly and is one of my all time favourite films!

'Wait.. what?' I hear you say, but among other naughties chick flicks this film was actually based on a Shakespeare play. This one adapts Twelfth Night, and I love it just because it is so clever! The characters retain the same names and the setting of a 16th Century court is moved to a contemporary American High School, but rather than simply being about a confusing love triangle as in the play, the film updates the story with a great angle where Viola gets to prove she is just as good as the men.

4) Gone with the Wind

This one is very problematic because of its racial depictions, largely because both the film and the book are really old. It's also epically long. But it is still a great adaptation and captures the book brilliantly. It would be my favourite thing ever if a newer version of this were to be developed!

I committed the cardinal book lover sin of watching the film first with this one. But regardless it is hands down one of the best films I have ever seen and really brought the book to life. But be aware that regardless of which you go for first, you will ruin the ending so choose wisely! 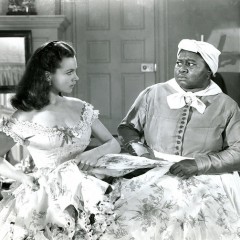 Cover to cover: a tale of two versions