The industry openly welcomed caucasian rappers who were once unheard of in Hip Hop, and now race doesn't seem to be an issue. The colour that you are doesn't stop you from having a good career once you have the talent. Just look at Eminem, Machine Gun Kelly, Yelawolf and many more. What about LGBT performers though? Would this be openly accepted within the industry? There have been a very limited amount of artists who have come out, and that's most likely because they know there would be a negative reaction.

One of the very first Hip Hop artists to come out as gay was Frank Ocean. To be honest, the reaction from some of the Hip Hop community has been fairly positive. Frank received praise from artists Such a Jay Z, Busta Rhymes, Neyo, Beyonce and 50 Cent. So this shows the Hip Hop may just be ready for more diversity within the industry. But whilst many praised Frank, it's likely that many other rappers would refrain from working with Frank, due to his sexuality. T Pain mentioned in an interview that he knows rappers who will not work with Frank for that very reason. In my opinion, Hip Hop still has a long way to go before something like this is fully 'accepted', not just by some, but by all. Many other Genres have openly LGBT artists, such as Sam Smith, Elton John, Joe Mcelderry and Adam Lambert. The sexuality of these artists do not seem to affect them getting collaborations, or stunt their profile. But in Frank's case, I truly believe that he would be included much more if he hadn't come out, and that's the sad truth.

It doesn't help that Hip Hop has a typically masculine image. There are similar arguments about the lack of diversity for women in Hip Hop, it's difficult to find a place in an art form that has historically had a fixed view of gender roles and behaviour. This spills over into the language used, and it's no secret that the Hip Hop community has also been criticised many times for its use of homophobic slurs in songs. Many artists have done this. Their explanation is usually the same, they say that they didn't mean to use the word offensively, and it was used for the dramatic effect and/or rhyming purposes. The industry openly uses the N Word, so artists certainly aren't afraid to use controversial words. However, many would argue that this is still unacceptable and it is usually black artists who use the N Word in songs. You won't really find many white rappers using it, because they know for a fact that there would be an uproar. So why then, should rappers be able to use homosexual slurs? The reasoning of black rappers is that if you are black, you are free to to use the N Word. With that logic, only LGBT artists should be able to use slurs that relate to them.

For many Hip Hop lovers, it would be best if derogatory language was left out of lyrics as a whole. A big move perhaps, and after all, it forms the foundation for a big part of this genre. But LGBT slurs? It's a contradiction that's hard to make a case for. 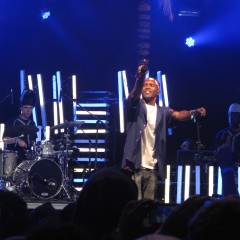 Is Hip Hop still behind on LGBT diversity?