How has the Ukrainian resistance utilised the power of song

For the past few months, news about the war in Ukraine has dominated the media. However, a new desire to explore the humanitarian aspect of conflict has seen the BBC and other major platforms discuss the personal, social, and, most notably, the artistic results of the war. With so many stories trailing through social media, it is difficult to assess the benefit of music in uniting a country divided by weapons as devastating as bombings, bullets, and tanks. Is music a futile waste of resources, a way of assuaging international guilt? Or is it a genuinely uplifting phenomenon, surpassing individuals to tap into the spirit of the nation?

The most notable example of music as a force of opposition is the Ukrainian rock legend, Slava Vakarchuk, who has reached international popularity as leader of the band Okean Elzy. When war broke out, Vakarchuk enlisted as a foot soldier, only to be told that he could do far more good by spreading music throughout Ukraine. Through a series of home videos, the media have focused on his performances in underground stations, bunkers, and hospitals.

His interview by the BBC shows him to be a humble man, risking safety for the sake of song. Indeed, his new hit, ‘Obiymi’, was filmed in the ruins of Kharkiv - one could almost forget the music video isn’t using the aesthetic of destruction as a planned artistic choice, but rather is filming in a genuine war zone. However, what is most notable is the approach of Vakarchuk to the war. In an interview with ‘Rolling Stone’, he listed the three things he desired from the world for Ukraine. The first was military aid, the second was economic sanctions for Russia, and the third was spiritual support. It was the order that most struck me.

The next story which pulled at international heartstrings was that of 10-year-old Gleb, who fled from Ukraine with few possessions but his recorder. He is part of a youth orchestra that was evacuated to Slovenia, one of 140 members of the orchestra whose families were relocated. The support from their country of refuge has focused on their music, with Slovenia’s top conductor, Živa Ploj Peršuh, preparing them for a performance in front of the Slovenian president. It is notable that Slovenia has offered not only food and shelter but also a platform on which the children can be heard. Once again, it seems that safety and practical aid have been underpinned by spiritual support.

A final story to consider is that of a teenage rock band based in Avdiyivka. Maksym, the drummer, discussed how a current misperception of Ukraine views the entire country as distraught and damaged when, in reality, life is continuing in pockets of normality. The band argues for the importance of music in providing an outlet for them to express and communicate their emotions to the wider world. Indeed, like several other local projects, their band Metamorphoza is now funded by several local businesses as well as being sustained by the United Nations Development Programme. The support shown for this band demonstrates the importance placed on the arts in times of need, the focus on life as well as death in a time of conflict.

Music has always been an integral part of sustaining morale during war. From marching songs made popular by the American Civil War to Vera Lynn’s ‘We’ll Meet Again’ and now to Ukrainian resistance anthems, it appears that music is a way of uniting people and giving them faith. What is interesting to see is how music has also been used to prove strength and determination, never at the cost of practical aid, but rather grounding it in faith and the stoic belief that better days are ahead. 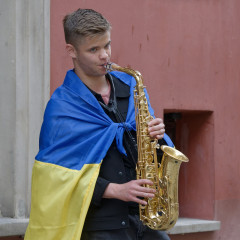 How has the Ukrainian resistance utilised the power of song