Voice MagBlogsHow to: improve at c…

Knowing the rules and very basics of chess is one thing, but being able to play a decent game is another – hopefully this guide will help

Chess has seen somewhat of a boom in the past couple of years, with streaming platforms like Twitch allowing some of the world’s best players – like Daniel Naroditsky and Hikaru Nikamura, among many others – to reach a large audience and garner more interest in the game. The popularity of The Queen’s Gambit also led to a 700% increase in people signing up to online chess websites like chess.com, as well as an increase in the number of games played by existing users. While those numbers haven’t stayed consistent – you can hardly expect everyone to fall in love with it and continue playing – the popularity of chess has unquestionably increased. It still often sits among one of the more popular categories on Twitch, and the biggest chess YouTubers now have millions of subscribers.

The premise of chess is very simple. Two players control 16 pieces each (one king, one queen, two rooks, two bishops, two knights, and eight pawns) on a chess board made up of 64 squares in an eight-by-eight grid. The goal is to checkmate the opponent’s king, i.e. achieve a position where their king is under attack (in check) and unable to escape.

While the premise is simple, however, actually learning the game can be rather daunting. Chess is endlessly complex, and there are more possible games than there are atoms in the observable universe. Chess is one of the most complex strategy games on the planet, so it isn’t as simple as learning how the pieces move and just… moving them. You need to know why you’re moving them, where to move them. If you want to be any good, you need to have a much deeper understanding of the game than simply knowing the rules. So with that in mind, here are some basic principles to follow if you’re looking to improve your chess.

One of the most important bits of advice and general guidelines you can follow in chess is to control the centre. There is a reason that the most common opening moves are e4 and d4. Not only do those moves open up space for you to develop your minor pieces, the pawns are then able to apply pressure to the centre and fight for control of it.

The reason the centre of the board is so important is that if you can find a place there for your pieces, you are able to control more squares. A knight on one of the sixteen central squares has eight possible moves, while a knight on the rim has four possible moves and a knight in the corner of the board has a maximum of two. Similarly, a bishop on one of the four central squares can control up to thirteen squares, while a bishop in the corner of the board controls seven.

The more squares on the board you control, the better off you are, and the centre is hugely important to controlling the board.

It might sound obvious, but you’d be surprised. All your pieces begin on the edge of the board, and your number one priority in the opening is getting them developed (and hopefully controlling the centre!). There’s another similar principle that beginners are often told to follow: you should never move the same piece twice in the opening. The reasoning behind that is that while you’re in the opening you need to focus on developing your pieces, and moving the same piece twice means wasting a move that could have been spent developing. Don’t aimlessly push pawns and don’t keep moving the same pieces around; develop all of your pieces, and try to control the centre in doing so.

The king is the most important piece on the board. In a slightly oversimplified way, if you don’t protect the king, you lose the game, and if you attack the opponent’s king, you win the game. Make sure you always prioritise your own king’s safety before setting out to do anything else – if your king is wide open to being attacked, your plans will quickly go down the drain. As soon as your pieces are developed, focus on castling and ensuring your king is safe before coming up with some ultra-attacking masterplan.

While these principles are certainly not universal, follow-at-all-times cheat codes, they can be infinitely helpful to beginners. Players who know the rules and nothing more will struggle with knowing what to move and why, so some basic principles like these to follow will give you a goal to aim for and a bit of a better understanding of the game. 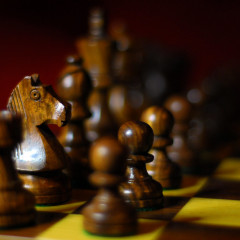 How to: improve at chess

Knowing the rules and very basics of chess is one thing, but being able to play a decent game is another – hopefully this guide will help