Last week, a friend of mine inquisitively asked how many gigs I have actually been to. I paused for a moment, eventually concluding that it must be at least close to, if not over, three hundred.

I find it incredibly difficult to convey the absolute magic of live music, especially to those who have lesser experiences with it. It just feels totally incomparable to anything else – what could possibly beat standing in a room with hundreds, or even thousands of people, dancing and singing to songs that have an incredibly individual meaning to each and every one of you? I take immense comfort in knowing that every single gig I attend, someone in that room is seeing their absolute favourite band or artist perform. It may be the greatest night of their life, and that sparks an insurmountable joy within me.

Something else I take great pleasure in is taking people to gigs, introducing them to new artists, and maybe even familiarising them with live music for the first time in their lives. The sense of pride that I get from someone enjoying a show I’ve taken them to see would make you think that I was the one performing. The thrill of having the conversational run-down on the way out of the venue is unmatched, although I often feel incredibly over-zealous in my energy levels and excitement. I won’t overthink that, though, and just hope that it’s at least somewhat endearing.

Going to several gigs a week on a regular basis can feel a little bit draining from time to time, but the enthusiasm that radiates from deep within me when I’m stood in a venue waiting to see an artist that I’ve waited so long to see is one of the most invigorating and life-affirming experiences I can recall. I’ve had this feeling a few times this year, in totally different circumstances each time. First up was Midlake, a band that I have loved for close to a decade but who had somehow had totally evaded me up until April, when I saw them grace the stage at Manchester’s Albert Hall. Shortly before they came onstage, the realisation grew on me that I was finally about to see a band that I have loved for so long, and for the first time. It wasn’t as if I hadn’t been anticipating it beforehand, but having that total wave of excitement flush over me at once was truly a magical experience. Once they began their performance, my head was in my hands and my mouth agape for the duration of the show.

The same happened more recently, when I saw Nick Mulvey perform at Gorilla – another artist who has evaded me, but in different circumstances. Whilst Midlake performances are more of a rarity here in the UK due to the band being American, Nick Mulvey was more elusive in an irritating way; I was due to see him a few years back at a festival that was rained off, and other tour dates since have been inaccessible for various reasons. There were moments that felt as if I would never get to see him, and so running for the train with seconds to spare on the way there really spiced up the experience. Alas, I made it, reserved myself a front-row spot, and enjoyed every single second of the show.

It’s not just new artists, though, that can spark such a level of excitement in me. Some bands I will simply never tire of seeing. Being such a frequent gig attendee often means that I will see an artist more than once on a tour, which results in me learning the choreography of the sets like clockwork; I can predict with accuracy which song will follow the last, where an extra drum fill will be thrown in, or where the lighting gets particularly ethereal. As someone dabbling in live music photography, this can actually be a really handy skill, as that slight advancement of knowledge can land you the most perfectly-timed shot, and from the best angle.

Over the course of the pandemic and various lockdowns, the absence of live music left a gaping hole in my life and in my diary. At first, it felt like a temporary inconvenience, and a sacrifice I didn’t mind making for the good of public health, but I feel as if I slowly began to descend into a state of delirious withdrawal. I didn’t recognise this at the time, but looking back, there’s little other explanation for it. I mean, it’s not really normal to spend the Glastonbury weekend of 2020 pitching a tent on your bedroom floor and streaming old sets on iPlayer, is it? It was things like this, though, that really kept me entertained and happy throughout such a dark time. I still relied so heavily on a source of live music that archival livestreams felt like a good option, but once I got back in a field with a group of friends bouncing around to some of my favourite songs, those lonely nights in front of a screen totally paled in comparison.

Another thing that proved to be an absolute saving grace throughout the isolation of the pandemic was music communities. Through the power of social media and a shared love for music, I made some of the best friends I have ever met. It was these times that enabled me to really build a community of people around me with whom I could spend my time, and since the world has opened up again, attend gigs with – that is something I will forever be grateful for. Some of the most interesting, dedicated, passionate and caring people have fallen into my life this way, and have genuinely altered the course of my life. So far I’ve made good progress on my goals to travel, even as far as Minneapolis, to meet as many of these wonderful people as possible, and at the end of this month I will be attending a gig with around 50 others that have been brought together by music in the same way. Being part of such a dedicated community that are willing to travel far and wide to be in the same space with people they met in a universally difficult time is infinitely heartwarming, and so rewarding. I’ve even witnessed romantic relationships form in this way too, proving that the force of live music is absolutely unstoppable, even when events were forced to grind to a halt globally.

Thankfully, the power of livestreaming was harnessed very early on, with bands across all genres performing streams on various social media platforms, or releasing old archive footage. A particular highlight of this for me was every Thursday night, when Radiohead would livestream gigs that spanned their entire career – some even from the year that I was born, making it possible to enjoy something I could never have otherwise witnessed. I began watching these streams alone, but as my network of friends expanded, I would watch with others – we even made games out of the experience, guessing which song would come next in the setlist based on the year of the performance, and taking a sip of your drink if you guessed incorrectly.

Another benefit to these streams is the fact that it made live music accessible to people from all walks of life, and all over the world. Gigs can be very expensive, tough to travel to, or inaccessible for health reasons – all of which can be overcome by the power of streaming. It also allowed some of the UK’s most iconic venues to be saved from permanent closure, and kept bands financially afloat when touring was suddenly no longer an option.

If you hadn’t already noticed, live music means an absolutely incredible amount to me, and I think it truly is one of the most powerful things in the world. I could write about this for days (to the distaste of my editors, apologies guys), but I fear I would lose your attention. So, in summary, music will forever be an impeccable force of good, and an integral part of culture across the world. I truly believe that it heals the soul. Live music has changed my life time and time again, and I will never be able to fully express my gratitude for that. 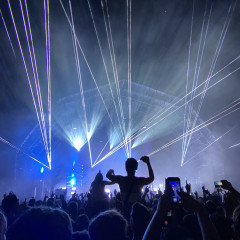 The undeniable importance of live music