Fans and friends alike showed up to support the band, packing out the room beneath a giant disco ball, with chants and cheers creating a ferocious atmosphere in the room. They played an enigmatic 50-minute long set, which included a new single and a cover of Cascada’s Everytime We Touch, prompting mosh pits and enthusiastic dancing from every corner of the room.

For a moment, the mosh pits calmed to see the audience spark up their lighters and hold up their torches, swaying to more of a ballad-esque ditty, proving their dedication to the band’s dynamic range and versatility. Despite their indie-rock roots, Garden Party definitely proved that they’re capable of putting on a show across many genres and moods, whilst keeping the crowd consistently enthralled and involved in the show. Once the band departed the stage, fans were jeering for more, and unfortunately curfew prevented them from performing another crowd-pleaser.

It was no mean feat for the band to draw in such a crowd on this fine Saturday evening, with a wealth of music events happening at the time – the band found themselves in tough competition with Manchester’s biggest festival, Parklife, as well as huge sold-out performances from Ed Sheeran, The Killers and Alicia Keys. It wouldn’t surprise me if the show was the most condensed form of a similar energy to those massive events in the city that night.

Garden Party are billed to play Y Not festival this summer, as well as London Roadtrip on July 28th. You can get tickets here. 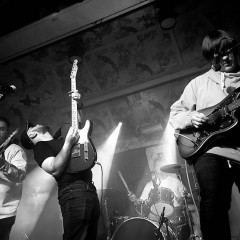