With the running order released, what can we expect from this year’s Grand Finals?

The 2022 Eurovision Song Contest is fast-approaching, and the running order is out – it’s official, Eurovision is well underway and we’re not far off finding who will lift the trophy this year. Will it be Italy for the second year in a row? Can Sam Ryder skyrocket the UK to the top of the scoreboard? Who knows! It’s Eurovision, and absolutely anything can happen.

Here’s what you can expect from Eurovision 2022’s Grand Finals.

Yes, you heard it. Amidst his incredibly cool space-rocket staging (that is somewhat oddly reminiscent of an Easter egg being broken) Sam Ryder is picking up a guitar to belt the final chorus!

Approximately, 3840 spotlights are used during their performance and it screams party anthem. It’s also opening the show, so expect a club banger to start your Saturday night off right.

Designed by Alin Le’Kal, the custom-made outfit weighs over 40 kilos. What’s more is that there’s a bit of risk involved in Sheldon Riley’s performance, especially when there is walking upstairs and smoke involved.

There’s not a salad in sight during the Grand Finals

TikTok favourites, Citi Zēni representing Latvia did not qualify for finals with their tune ‘Eat Your Salad’, which mixed environmentally conscious lyrics with innuendos. I mean, we’re clearly missing out on not hearing the lyrics ‘Got my reusable bag / That swag, my flex, my flag / Zero waste, that is my jam’.

You read that correctly. Serbia’s entry Konstrakta teaches us how to wash our hands properly, sings about healthy hair and Meghan Markle. ‘Why?’ you might be asking? It’s a reflection of our society and how we view health. It’s performance art really, and it’s enchanting (you’ll be clapping along no doubt).

That would be Finland’s The Rasmus with their song ‘Jezebel’. You might remember their biggest hit ‘In The Shadows’ which has passed the 100 million streaming mark on Spotify.

Mika’s not Italian, but he’s appeared on Italian X Factor and that’s all we need to know. We aren’t complaining, the ‘Grace Kelly’ singer is a big hit across Europe. He is hosting alongside Italian singer Laura Pausini and television presenter Alessandro Cattelan. At the Eurovision Hosts’ Press Conference held on 9 May, Mika said: “I’ve watched Eurovision my whole life and I think it’s an amazing show… It’s amazing to see the impact it has these days. I love it and I’m really happy to be here”. We’re happy Mika is there too! (He’s also doing a special performance in the intervals, to be specific, a greatest hits mashup).

Portugal’s Maro sings ‘Saudade, Saudade’ with her friends on stage and has a connection with a previous winner

There’s something really warm about Maro’s song, and the fact she is standing in a circle singing a song with her friends is possibly the most wholesome moment you’ll see during the Grand Finals. Also, fun fact: Maro has collaborated with former Eurovision winner Salvador Sobral, who gave Portugal its first ever win in 2017 with his song ‘Amar Pelois Dois’ that he co-wrote with his sister. You can see Sobral just straight up vibing in Maro’s music video ‘we’ve been loving in silence’.

Ukraine make a powerful statement on the main stage and beyond

Ukraine’s commentator this year will be broadcasting from inside a bomb shelter in Ukraine.

Ukraine’s act Kalush Orchestra and their song ‘Stefania’ have some stunning staging and lighting that really hits home the harrowing reality of Ukraine right now. It’s a powerful move and one which will leave audiences stunned. Since the war, the tone of the song has slightly changed and without a doubt, we will remember this performance in years to come.

Here’s Kalush Orchestra’s performance of Stefania for the Eurovision House Party 2022 from the House of Scientists, Lviv, Ukraine.

You heard it here first, following Eurovision tradition our current 2021 winners will take to the Turin stage before handing the title over to 2022’s newest Eurovision champion. The beloved Italian rock band made waves last year, completely changing the game and visualization of Eurovision – they have since conquered the world with their songs, crossing language barriers and bringing interest to the Italian language on a global scale. 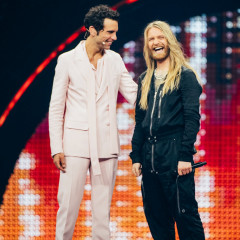 Eurovision 2022: What can you expect from the Eurovision Grand Finals?

With the running order released, what can we expect from this year’s Grand Finals?