Broken promises – it seems the government has forgotten the T in LGBTQ+ with their latest U-turn on banning conversion therapy.

Government plans to ban conversion therapy were scrapped on Thursday night. before being backtracked just hours later after Boris Johnson received backlash within his party and by the public. A leaked Downing Street briefing paper, shared with ITV, said “the PM has agreed we should not move forward with legislation” to ban conversion therapy, despite promising to do so since 2018.

So, it’s not much of a U-turn then. You cannot claim to ban conversion therapy in the UK, and then allow it to legally exist for a specific group. It seems the government is prepared to disregard and harm trans lives in the process.

Conversion therapy has been compared to torture. According to Stonewall, conversion therapy refers to: “any form of treatment or psychotherapy which aims to change a person’s sexual orientation or to suppress a person’s gender identity”. It is based on the idea that being LGBTQ+ is ‘curable’. The practise of conversion therapy is an unethical means to suppress sexual orientation or gender identity, the definition includes both – so why has the government only decided to protect those under LGB, and proceeded to forget about the T?

To call this ban on conversion therapy a ‘U-turn’ is obscene, as once again trans people and their lives are deliberately being left out of the narrative. If the legislation doesn’t protect everyone under LGBTQ+ then it’s not a ban, it’s a partial promise set to forget about trans lives.

In a tweet by Galop, an LGBT+ anti-abuse charity, they describe a case of two LGBT siblings both put through conversion therapy by their families – one being bisexual, and the other transgender. Under this proposal, “the government would only protect one of them,” they said.

The government’s proposal is intended to divide the LGBTQ+ community. By announcing a U-turn on the decision, the expected reaction was to be one of celebration and recognition that a cruel practice like conversion therapy should not exist in this country in any form whatsoever – a portrait painted of a government that actively cares about the wellbeing and livelihoods of LGBTQ+ people living in the UK. The reality is very much the opposite.

We live in a country with a Prime Minister that will commend the bravery of the first trans MP, Jamie Wallis, saying: “The Conservative Party I lead will always give you, and everyone else, the love and support you need to be yourself”. A Prime Minister that, on the same night, will open a speech with “Good evening ladies and gentleman – or as Keir Starmer would put it, people who are assigned female or male at birth” to his party.

This hypocrisy in both words and actions demonstrates how poorly trans lives are valued by our government. The punchline of a cheap joke. The barely readable fine print in an amended proposal.

However, we can see through this. We can see how little trans lives are valued in this country, and how damaging this proposal will be. Even the government’s research shows how hard conversion therapy has hit trans people in the past – and still, the government exposes trans people to further harm.

In a July 2018 research report titled ‘National LGBT Survey’, results showed that trans respondents were much more likely to have undergone or been offered conversion therapy.

In a Galop report released today, they spoke to over 5,000 LGBT+ people, and 5% had experienced ‘conversion therapy’ from their family members. This figure doubled for trans and non-binary people (11%).

Everyone deserves the same protection from this cruel practice, and this so-called ‘U-turn’ is entirely unacceptable and a betrayal to LGBTQ+ communities. The exclusion of trans people from protection against this abusive practice ultimately leaves vulnerable trans people at risk of abuse. Those that have amended this bill are bystanders to the abuse of trans people. They are complicit.

Campaigns such as ‘Ban Conversion Therapy’ are calling upon people to take action, and make a difference by emailing their local MPs. In their words, “LGBTQA+ people have nothing to be ashamed of and there is nothing wrong or broken about who we are. Our sexual orientations and gender identities are diverse and should be celebrated”. Boris Johnson’s ‘U-turn’ should have been cause for celebration, instead it condones abuse and proposes to set trans violence as a precedent in this country.

There’s no LGBTQ+ without trans people, and trans lives must be protected from the disgusting reality of conversion therapy. 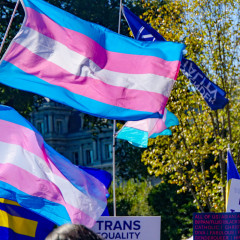 Broken promises – it seems the government has forgotten the T in LGBTQ+ with their latest U-turn on banning conversion therapy.