Sure America, just change it up a bit so it doesn't look like you've copied and pasted.

Campy, bonkers and cram-packed full of political drama – Eurovision is my highlight of May. What’s not to love? It introduced us all to Loreen, Lena, and Dancing Lasha Tumbai, the song that has single-handedly revolutionised and redefined multi-use tin foil.

This March, the legendary format comes to America with the ‘American Song Contest’ (ASC).

The first edition of the American Song Contest is a cause for mild concern. When it comes to producing adaptations of global hits, America tends to laugh maniacally at the prospect of ruining everything decent (don’t search about the US Inbetweeners, trust me).

However, the ASC creators are, thankfully, those over at Eurovision. So surely it can’t go that wrong? Eurovision’s format has been tried and tested since 1956 when Switzerland lifted the very first Eurovision trophy.

Instead of individual countries independently electing their own representative act, the American version will find one artist to represent a selection of America’s 56 states, territories and districts. Following its mother show, they’ll all compete in a singing smackdown for the top spot on the leaderboard.

The specific rules for ASC are yet to be announced, though from what is currently released it suggests that the format has slightly shifted from Eurovision tradition.

Before the Grand Finals of Eurovision, there are two semi-final rounds to determine the best 20 acts to proceed. However, 6 countries are automatically pre-qualified for the Grand Final – the ‘Big 5’ including the UK, France, Germany, Italy, Spain – and then the host country. In total, there is an average of 26 Grand Final participants.

In contrast, ASC will be broadcasting live every Monday for 8 weeks. Each week more songs will be unleashed into the world until the Grand Final on Monday 9 May, which happens to be the day before the first Eurovision semi-final in Turin, Italy.

If ASC is anything remotely similar to Eurovision, then thankfully Eurovision’s calendar life will be extended by a couple of months.

Alternatively, if ASC is actual garbage, at least Eurovision will be everyone’s saving grace at the end of it – the glittery light at the end of the tunnel, if you will.

Earlier last month, Grammy-winning pop star Kelly Clarkson and multi-platinum artist Snoop Dogg were announced as the hosts for the first star-spangled ASC. Since the announcement, the contest has been hit by scandal with sexual assault lawsuits fired at Snoop Dogg — at the time of writing, he remains as co-host of ASC airing later this month.

It is difficult to predict what will happen during the American Song Contest. However, every Eurovision superfan knows that music is one thing, and politics is another. They go hand in hand in this contest. You cannot tear them apart, else what would Eurovision become? Just a simple song contest with no extra flavour added. That’s an incredibly dull prospect.

With Eurovision, politics is all about the unsaid and reading between the lines. So it’s no wonder how the post-Brexit UK has shaped up to become both Europe and Eurovision’s laughing stock.

That brings forth the question, which unfortunate state will take on that sad token spot? Who will become the de facto public enemy no.1 whom everyone must vote against, simply because that’s just the way it is.

How will politics shape up in an American contest? Can we expect red versus blue states to directly oppose each other, or will states root for their geographical neighbours?

All will be revealed later this month. One thing’s for sure, and it’s a disappointing note to end on. The name ‘American Song Contest’ is frankly uninspired and boring in comparison to the sparkly title of ‘Eurovision’. Let’s hope that the actual contest doesn’t sway in that direction too. 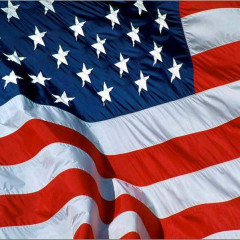 Sure America, just change it up a bit so it doesn't look like you've copied and pasted.