How Kenya responded to Russian aggression.

We may wonder about the purpose of the United Nations. We may question if power is its true aim or if the establishment of status is the true focus of each country. What good does an international body achieve in the face of pandemics, mass poverty, total war?

But then, amidst these fears, UN speeches from countries like Kenya suddenly start to trend online…

During an emergency Security Council meeting on 21 February, Kenyan Ambassador Martin Kimani made a speech on the current crisis over Russian action towards Ukraine. He spoke about Russia recognising the Luhansk and Donetsk regions of Ukraine as independent countries, about how this undermined the integrity of Ukraine and threatened the peace at its borders. But it was the plea he put forward to end the conflict that captured the imaginations of the internet.

"At independence, had we chosen to pursue states on the basis of ethnic, racial or religious homogeneity, we would still be waging bloody wars these many decades later. Instead, we agreed that we would settle for the border that we inherited. But we would still pursue continental political, economic, and legal integration," Kimani stated, encouraging Russia to accept imperfect borders rather than fight for the ideal division of territory.

In this post-colonial world, we see the legacy of border divisions still plaguing victims of empire. But Kimani’s words brought a new approach to the issue. His plea was not to rectify the mistakes of colonial borders, but rather to live with and build upon them. He did not lay blame in his speech on certain nations; he merely looked forwards without pessimism. His speech differed greatly from the blame culture that circulates online, as prevalent in history lessons as in pop culture.

But Kimani’s speech had more than an innovative approach; it also used an innovative power dynamic. Traditionally, we have viewed the world in terms of east and west, north and south, developed countries and developing countries. The rhetoric frequently changes what is considered politically correct - even more so.

So what is the purpose of the United Nations? Is it merely a talking shop to delay action? Does it have any impact on the individual citizens of each country?

Today, I would argue that it does a lot more than allow elite politicians to complain about the issues of the modern world among themselves.

Today, I would argue that it sends a message around the world that rewrites the rhetoric of history, power struggles, and empire. And all that from the power of one speech. 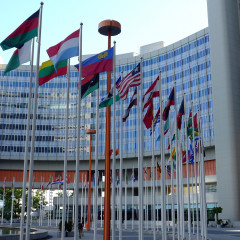 Borders - for peace or for perfection?

How Kenya responded to Russian aggression.