On Saturday 15th, a volcano in Tonga witnessed a series of violent eruptions, triggering tsunami waves and strangling the region with ash, dust, and debris. Communication links were largely destroyed.

The BBC has run an article about the disaster, likening the area to a “moonscape”. Images of the volcano’s force have pervaded the media, with satellite pictures being the main source of external reporting on the event.

And yet this horror story got me thinking. What would the world be like without photography, without the images of this disaster? How would we experience far off corners of the globe, micro-matters, a view of earth from space?

I began to wonder what a world without visuals would look like – and it was a world that was very dull indeed.

A recent media trend has seen the colourisation of historical images. Photographs of World War One soldiers have been restored and revitalised, adding colour to the black and white images to make the past more vivid, more emotive, more relatable. So what would the opposite be like? A world in which we have no proof of the real world that can be printed on paper or sent on a screen?

Firstly, how we record individual lives would be changed. No longer could you record the stages of life through images of friends, family, events, celebrations. Perhaps the written word would serve as a replacement, or perhaps journal-writing and diary entries would increase in popularity. Yet it would seem to me that you would miss out on so many individual moments that would be lost to memory, forgotten with the passing of those involved.

Next, how we share information would be changed. No longer would the saying ‘a picture is worth a thousand words’ be the motto of journalists. Experiences would have to be seen by the self, felt by the self. You would have no real idea of what different landscapes would look like; generic drawings could satisfy some, but the variety of images would be wildly reduced.

And finally - technology. We would not know what far stretches of outer space existed, which microbes can be found under investigation. Paparazzi culture would disappear, and yet, alongside it, so would the ability to exchange images of loved ones who live abroad.

So while many berate the excessive use of camera phones, bemoaning the modern inability to “live in the moment”, it is important not to forget all that we gain from photographs too. Consider what they will mean to us in the future and what they provide for us in the present.

Until communication links open once again with Tonga, we must rely on such images to help us liaise with them. While they remain our only source of news, let’s hope such images lead to aid, and funds, and support.

Photographs have changed the world, and with such power in our back pockets, they will continue to with every smartphone user across the globe. 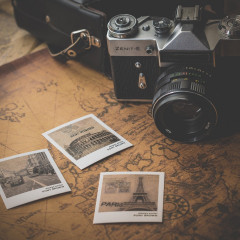