A song’s curious journey to memedom, and what it says about attitudes towards amateurdom

Like a great many pieces of meme music, Wonderwall is no longer just a song.

Having just had a run-in with COVID and having been unexpectedly gifted a guitar for Christmas, I’ve had lots of time to sit in my room and try to learn this new alien device (hey, I’m a wind player, if you can’t blow into it, it’s basically witchcraft to me). That, naturally, led me to Wonderwall, and in doing so, made me think about how this song came to be a meme and what that might say about how we receive music. And today is gonna be the day that I’m gonna throw that knowledge back to you. (I’m so sorry!)

The song is bigger than us. — Liam Gallagher

Wonderwall was a success right out of the gate, getting to No.2 in the UK charts (knocking Gangsta’s Paradise down a slot but not quite beating I Believe/Up on the Roof by Robson and Jerome). To date, it has sold 2.4 million copies in the UK alone, which certifies the song for quadruple platinum with a global sales total of 22 million. Its success lives on into the modern age of music streaming, and as of October of 2020, the song officially surpassed its billionth stream on Spotify.

Amongst guitar players, the song had a different kind of popularity; everyone wanted to play it, especially beginners. It’s often argued that Wonderwall has popularity amongst beginners and “phoney” guitarists because it’s a standard 4-chord-song, but I don’t think it’s so simple.

Technically, Wonderwall isn’t even a 4-chord song. Besides the fact there’s a Cadd9 in both the pre-chorus and chorus if you play it accurately to the track, Gallagher also sneaks a cheeky Dsus4/F♯ in the pre-chorus, taking the song up to a whole 6 chords — I didn’t even know us musicians could count that high! Yet, in my experience of learning, Wonderwall just feels more satisfying to play as you’re hashing your way around this new instrument.

As fellow contributor Megan Hockley points out in her article on learning to play the guitar, Wonderwall’s finger positions are very friendly for beginners.

The funny thing is, I don’t even know how to play it on guitar, and it’s probably one of the easiest songs ever. People at parties are like, “Play it”, and I say, “You f*cking play it then.” — Liam Gallagher

I can tell you firsthand: getting that rhythm change down as a beginner guitarist feels awesome. It makes you feel like a real guitarist, like you’re really starting to get somewhere with it. It is in this feeling that a meme is born.

For those unfamiliar, “Anyway, here’s Wonderwall” is a type of meme poking fun at the ubiquity of the song in every guitarist’s set of songs that they might know. However, this doesn’t quite encompass the whole meme.

Memes are, if we are to take the original Dawkinsian definition: “[a] unit of cultural information spread by imitation”. However, I would argue that in the modern sense, a meme is as much the act of imitation as it is the idea being spread (“to meme” is a verb now).

The Wonderwall meme isn’t about the song; it’s about the player. It is about the stereotype of someone bringing a guitar to a party to look cool, pulling it out, and playing an easy song that sounds impressive and everyone knows to look cool. The meme is both the idea of the self-important novice guitarist and the action of performing the song in these settings, either ironically or unironically.

Whilst this can feel like a cathartic critique of a frequently quite chauvinistic engagement in social dishonesty, it is not without thorns. From this meme, there is an implied discouragement of new guitarists from trying to learn the piece: it becomes a “cringe” activity. This is a shame since, as mentioned above, it is a genuinely very useful and rewarding piece for the budding guitarist to learn.

However, I think pointedly there is a more general issue here, and it’s to do with the interplay between Wonderwall being a cliché song amongst amateurs and this idea of playing the song being seen as a cringy thing to do. We all know deep down most people who would want to play their instrument at a social function have more wholesome motives: they want to share their, often newly budding, joy for the music and the instrument. Without considering the nuance of the meme’s intended target, those bad actors, it can seem like wholesale derision of naïve but enthusiastic beginners.

This, I think, is where I think this meme can shine a light on our understanding of being an amateur. Amateur etymologically simply means “lover of”, and in its original conception means someone who engages with a topic enthusiastically and in a non-professional capacity. Like many words over time, its meaning has shifted and now equally, if not more so, refers to someone who isn’t very experienced or even very good at something.

The issue, of course, with this shift from admiration to the dismissal of amateur engagement is that everyone begins as an amateur in any field; we are all beginners once. The path from beginner to experienced musician might be paved with perseverance, but the only thing that can push someone to walk it is a love for the music and the instrument. The enemy of that enthusiasm is self-doubt and imposter syndrome – something I’m sure we can all relate to. It is easy to see how this might be exacerbated by a culture that discourages sharing what you discover through your learning for fear of it being not good enough, cliché, or the understanding that the desire to share with others is actually cringeworthy.

I decided to learn Wonderwall as my first full song on guitar as a joke. I told my friends and they rolled their eyes and groaned. I giggled and told them, “hey, every beginner learns Wonderwall, them’s the rules, I don’t make ‘em!”. In this irreverent postmodern age, sometimes it’s funnier to play up to the meme than the meme was in itself.

There is truth to the Wonderwall meme, however. It does, I think successfully, satirise those people who misguidedly think the ability to play one pop song suddenly makes them Jimi Hendrix, and who let their egos inflame disproportionate to their skill. The meme is still funny because it still comments on truth, and highlights the absurdity of the everyday experience.

But, equally, I am glad to see the rising criticism of cringe-culture condemnation of amateurdom that memes like this can find themselves involuntarily leaning into, and mostly, I’m glad to report, that criticism is coming from youth voices like us.

Writers from university papers like The Peak, New University’s paper, and Her Campus are a few of the young people commenting on the phenomenon. A cursory glance over YouTube will show hours worth of video-essay content from young creators highlighting the issues it brings. However, with much of established journalism still leaning into the core tenets of cringe, it is clear there are still discussions to be had.

Perhaps a rabbit-hole to dive down for another article… 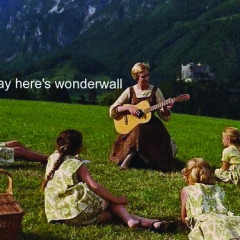 A song’s curious journey to memedom, and what it says about attitudes towards amateurdom